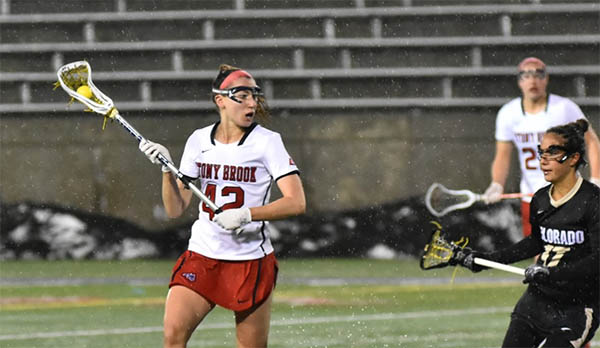 Kylie Ohlmiller broke the NCAA Division I career record for both total points and assists on Saturday afternoon at LaValle Stadium, as No. 1 Stony Brook women’s lacrosse downed UMBC by the final score of 22-7.

“We came out tight, and [UMBC] has a talented team,” said head coach Joe Spallina. “They hit us, and with 11 minutes to go (in the half), it was tied. The competition is good for us, and I was really happy with the way we responded from that point.”

Courtney Murphy had eight goals and three assists in total, scoring six times in the first half of play. Murphy is now up to 66 goals and 23 assists for 89 total points this year.

Ohlmiller broke the NCAA Division I career points record in the first half of play, surpassing the previous record set by Maryland’s Jen Adams (445). She became the NCAA Division I career assist leader in the second half of play, breaking the previous record for helpers set by Northwestern’s Hannah Nielsen (224). Ohlmiller now has 62 goals and 49 assists for 111 total points in 2018.