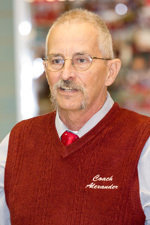 Long time Stony Brook University Head Men’s and Women’s Swimming and Diving Coach and legendary mentor Dave Alexander passed away on June 28, 2012 at the age of 62 following a long and courageous battle against cancer.

“On behalf of the entire university community, I extend my most heartfelt thoughts and prayers to the Alexander family during this incredibly difficult time,” said Stony Brook Director of Athletics Jim Fiore. “We lost a treasured member of our family today. Coach Alexander was an exceptional mentor and educator for literally thousands of Stony Brook student-athletes during his 32-year tenure. Dave’s greatest impact stretched well beyond the pool, as he touched the lives of so many as a coach, friend, colleague and ambassador for our institution. I know I speak for the entire University community when I say that he will be forever missed. There is no doubt that Dave’s indelible spirit will remain with us always.”

Alexander, winner of more than 300 dual meets during his 32-year Stony Brook career, was the founder of the Seawolves women’s swimming and diving program in 1979 where he worked diligently alongside men’s swimming and diving head coach and friend John DeMarie. Alexander eventually took over for DeMarie in 1995 when he assumed his most current role as head coach for both Stony Brook programs.

“Today is a very sad day for me and all who knew David Alexander,” DeMarie said. “He was my best friend. We shared not only the pool, but our lives. Dave was always available to any of his swimmers who needed some time and good advice on any matter affecting their lives. He was always patient and understanding. I will miss him more than words can tell, as will so many others whose lives he has touched so positively.”

During his tenure as head coach, Alexander produced more than 100 All-Conference swimmers, four All-Americans and more than 20 NCAA Championship qualifiers. He was a three-time Metropolitan Conference Coach of the Year award recipient (1991, ’96, ’98) and was named America East Coach of the Year in 2006. He also led the men’s team to the Metropolitan Conference Championship title in 1998.

In lieu of flowers, the family has requested that donations can be made to the Stony Brook men’s and women’s swimming and diving teams. Visit GoSeawolves.org in the coming days for a tribute to Coach Alexander.