Get Your Tickets for Seawolves Baseball at Citi Field March 26 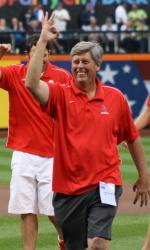 The Stony Brook baseball team is returning to Citi Field to take on St. John’s on Tuesday, March 26, at 4 pm, as part of a college baseball doubleheader. Tickets for the game are now on sale through the Stony Brook Athletics ticket office either in person or by phone at (631) 632-WOLF. Tickets are $10 and are good for admission to both the Stony Brook-St. John’s game and the Michigan-Yale game at 12 pm. Parking at the stadium will be $5. Concession stands will be open, and Stony Brook merchandise will be available for purchase.

This will be Stony Brook’s first-ever game at Citi Field, but not its first appearance. The Seawolves were the New York Mets’ guests of honor last June after returning home from the College World Series. The team took in batting practice and met some of the Mets players, and then head coach Matt Senk and his seniors Pat Cantwell, Tyler Johnson, Sal Intagliata and Evan Stecko-Haley threw out the ceremonial first pitch.

The Seawolves, who shocked the world when they defeated six-time national champion LSU in the NCAA Super Regionals to advance to the College World Series last year, are chasing their fifth America East championship and NCAA Tournament bid. They are 6-12 to start the 2013 season and 1-2 in America East and will play Rhode Island on Wednesday before facing Binghamton in conference action this weekend.