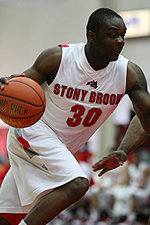 Trailing by 13 points at halftime, the men’s basketball team rallied to take a five-point lead with 6:42 remaining but Boston University ended the game on a 22-10 run to defeat the Seawolves, 70-63, in an America East Semifinal game on March 7 at Chase Arena in Hartford. Senior Muhammad El-Amin scored a game-high 20 for SB while sophomore Bryan Dougher chipped in with 16. Stony Brook will now await its opponent in the National Invitation Tournament (NIT), which it received an automatic bid to by virtue of winning the America East regular season title. First round NIT games are scheduled for March 16 or 17. It will be the first postseason appearance in program history for the Seawolves.

“What a terrific basketball game,” Stony Brook head coach Steve Pikiell said. “I couldn’t be prouder of my guys and the effort and heart they showed tonight and all season.”

El-Amin’s 20 points give him 501 on the season. He is the first Stony Brook player to score over 500 points since the Seawolves jumped to Division I. Junior Chris Martin added 11 points while sophomore Tommy Brenton had seven points and a game-high 10 rebounds for the Seawolves, who are now 22-9.

SB jumped on the Terriers early behind El-Amin, who hit three three-pointers over the first two and half minutes to give SB a 9-3 lead. BU answered with an 11-1 run though over the next four minutes to take a four-point lead. The Terriers pushed their lead to seven on a Lowe three before SB scored five straight points, three by Brenton, to climb within two.

SB eventually crept within one on a Martin hoop before Valadas Surutis hit a three to give kick start a 15-0 BU run that gave the Terriers a 37-21 lead. Dougher drilled a three with time winding down to cut SBU deficit to 13 at the break.

A Dougher three on SB’s first possession of the second half cut the BU lead to 37-27 and sophomore Dallis Joyner and Martin then scored back-to-back hoops to cut SB’s deficit to six. Another Dougher three made it 37-34. SB eventually tied the game on a Martin free throw with 15:34 to go.

O’Brien scored BU’s first points of the second half on the Terriers next possession but Martin responded with short jumper to tie it at 39. The Seawolves took the lead at the 12 minute mark as El-Amin drilled a three off a feed from sophomore Danny Carter.

SB still lead by two with just less than eight minutes left when John Holland tied the game with a tough runner in the lane. But El-Amin answered with a fade-away jumper to put SB back on top. El-Amin stretched the SB lead to five with two free throws but BU answered with four straight points to climb within one five and a half minutes to go.