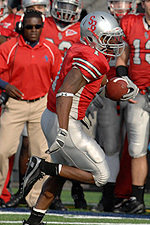 With the championship of the Big South Conference riding on the outcome of the game, it came down to the final minute of action when Stony Brook and Liberty each scored touchdowns in a frantic finish on November 21 in LaValle Stadium. With 30 seconds left in the game sophomore Michael Coulter hit redshirt freshman Jordan Gush with the game winning, 10-yard TD pass that lifted the Seawolves to a dramatic, 36-33, win over the16th ranked Flames. The victory lifted Stony Brook into a tie with Liberty at the top of the Big South standings with 5-1 records and gives the Seawolves a co-Big South Championship with the Flames. It was also the first-ever victory for Stony Brook over a ranked opponent and broke a 16-game Big South winning streak by Liberty. Stony Brook finishes the season at 6-5, while Liberty falls to 8-3.

In a back and forth fourth quarter, Liberty gained its first lead of the day when, on a third and one play, Mike Brown took the snap from center and bolted through the middle of the Stony Brook defense for a 70-yard score that put the Flames on top, 26-21, with 11:28 to play. The Seawolves wasted no time answering the Liberty score, taking over at its own 27 and quickly reaching the LU 42 on a 15-yard pass from Coulter to junior Michael Lepore. From there sophomore Edwin Gowins, who finished with a team-high 165 yards, pounded through the Flames for the 42-yard score. Junior Donald Porter then took the snap on a two-point try and lofted a pass to the back of the end zone that senior Chris Tyler made a leaping grab on to convert and put the Seawolves back on top, 29-26.

After both teams punted on its next possessions, Liberty moved back into position to score when quarterback Tommy Beecher scrambled 31 yards down to the SB nine. Two plays later Beecher found Dominique Jones across the middle for a score that put Liberty back on top, 33-29, seemingly wrapping up the win and the conference title with 55 seconds left.

But this would turn out to be Stony Brook’s day. The Seawolves took possession at their own 26 with 48 seconds left and Coulter threw an incompletion on first down. On second and 10 Coulter could not find any of his primary receivers, but saw Gush wide open down the left sideline. Gush corralled the ball near midfield and then headed toward the end zone, getting all the way down to the 10-yard line before being stopped for what turned out to be a 64-yard pass play. After an SB time out, the pair came up big again, as Coulter found Gush for the score that completed the dramatic finish to the game.

In the first half SB used its powerful ground attack to roll out to a 21-13 lead at the half. Just five minutes into the game on the first play of SB’s second drive of the day, Gowins burst through the Liberty defense for 52 yards and his first of his three scores on the afternoon. Liberty tied things up late in the quarter, however, taking advantage of good field position. The Flames started a drive at the SB 45 and were in the end zone in just four plays, with Beecher tossing a 34-yard scoring strike to Will Quarles.

Stony Brook’s ground game continued to dominate in the second quarter, grinding out 96 yards, while the Seawolves’ defense held Liberty to just four yards rushing. After Liberty tied things up in the first quarter, SB started an 80-yard drive that ended with 14:42 left in the second on an 11-yard TD run by Gowins, who rushed for 43 of the 80 yards on the drive that put SB back on top, 14-7.

After a Liberty field goal, the Seawolves came back again with another long drive for a touchdown, this one covering 76 yards. This time it was senior Conte Cuttino who carried the rushing load, running for 42 yards on the drive, including the final eight that put SB on top 21-10 with 4:28 left in the half. Liberty added another Matt Bevins field goal as time expired to close to 21-13.

In the third quarter the defenses took control, with SB limited to just 20 yards of offense and Liberty gaining 99. Forty-eight yards of that came on one drive when the Flames again took advantage of a drive starting on the SB side of the field. Beecher’s passing and running brought Liberty down to the SB 12, where Chauncey Holloway took it in the rest of the way. The Flames try for two was no good, and Stony Brook carried a slim 21-19 lead into the decisive fourth quarter.

After SB’s winning score, Liberty got the ball back with 27 seconds left, but senior Benjamin Clements intercepted Beecher’s final pass attempt as time expired to seal the win.

Stony Brook finished with 405 yards of offense, 248 coming from the ground game that saw Gowins finish with his 165 and Cuttino adding 89 more. Coulter finished completing 10 of 17 attempts for 157 yards and the one score. Gush led the SB receivers with 88 yards on three catches. Defensively junior Arin West led SB with 10 tackles while also breaking up three passes. Senior Tyler Santucci tied the Stony Brook record for career solo tackles, finishing his career with 147 to tie Aden Smith ’03.