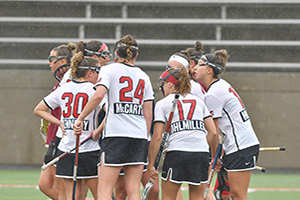 Five Stony Brook women’s lacrosse student-athletes have been selected as All-Americans by the Intercollegiate Women’s Lacrosse Coaches’ Association, as announced Thursday by the IWLCA.

Kylie Ohlmilller recorded a nation-leading 157 points in 2018. She was selected as America East Offensive Player of the Year, has been tabbed an IWLCA All-Region First Team player, and was selected as an Inside Lacrosse Division I All-American. Ohlmiller finished her four-year career with the Seawolves posting an NCAA-record 498 points and 246 assists. She also owns the NCAA single-season record for points (164) and helpers (86).

Courtney Murphy led the nation in scoring in 2018, recording 95 total goals. Murphy became the NCAA Division I career record holder for total goals scored on Thursday, April 5 at Hartford. She now has 341 career goals, breaking the previous record set by Temple’s Gail Cummings (289). The redshirt senior is also the first player in NCAA Division I history to surpass the 300 career goals mark.

Brooke Gubitosi helped anchor the Seawolves’ defense once again in 2018, a defense that ranked No. 1 nationally in goals allowed per contest (7.10). She led the program with 31 caused turnovers, adding 41 ground balls over 21 total contests.

Taryn Ohlmiller scored 52 goals to go along with 55 helpers for 107 points during her sophomore season in 2018. She recorded 10 games of three or more goals, surpassing the 100-point mark for the second straight year.

Stony Brook tied a program record with 20 victories in 2018, the second-straight year accomplishing the feat. The Seawolves finish the year leading the nation in six major Division I categories: points per game (29.28), scoring margin (+10.80), assists per game (11.23), shot percentage (.547), turnovers per game (12.00), and team defense (7.09 goals-allowed per contest). Stony Brook achieved its first No. 1 national ranking in program history during 2018, finishing the year atop all three major lacrosse polls for 11-straight weeks heading into postseason action.