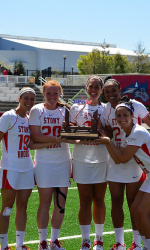 After winning the America East Championship for the first time in program history on May 5, the No. 10/7 Stony Brook women’s lacrosse team was picked to play Towson in the first round of the NCAA Tournament on May 10 at 7 pm.

Stony Brook (16-2) clinched its first-ever NCAA berth with a 14-3 win over rival Albany in the America East Championship title game at LaValle Stadium. The 11-goal win was the largest in tournament history, and the seven total goals the Seawolves allowed during the tournament were a conference championship record. Janine Hillier record six points en route to being named the tournament’s Most Outstanding Player, while Tewaaraton nominee and conference Player of the Year Demmianne Cook netted three and controlled five draws.

The Seawolves are enjoying another historic season under second-year Head Coach Joe Spallina, who has engineered a meteoric rise to national prominence. SBU has spent the entire season ranked in both major national polls and has cracked the top 10 for the first time in program history. The squad’s 16 wins and 287 goals surpass last year’s marks of 14 and 273, respectively, and its 11-straight victories are also a program record. Stony Brook also won its first-ever outright America East regular season title by going undefeated in conference play.

The winner of the Stony Brook-Towson game will take on No. 1 overall seed Maryland on Sunday, May 12, at noon.