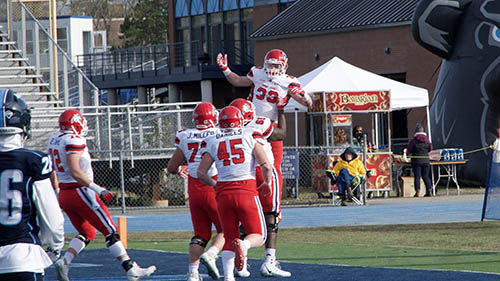 Building on one of the best regular seasons in school history, Stony Brook football enters the postseason as an at-large team in the 2017 NCAA Division I Football Championship.

The Seawolves (9-2, 7-1 CAA Football) will host Lehigh on Saturday at 2 p.m. ET in Kenneth P. LaValle Stadium in the opening round.

Stony Brook closed out the regular season with a thrilling 20-19 victory at Maine on Saturday with a “Hail Mary” as time expired. That win secured the Seawolves as the second place team in the conference behind unbeaten and No. 1 James Madison.

Lehigh earned the automatic bid into the field of 24 teams by claiming the Patriot League title. The Mountain Hawks finished the regular season with a 5-6 overall record and a 5-1 mark in conference play that included a 38-31 win over Lafayette on Saturday.

Saturday will mark Stony Brook’s first playoff appearance since 2012 and the third overall. The Seawolves owns a 2-2 record in the FCS Playoffs with home wins over UAlbany in 2011 and over Villanova in 2012.