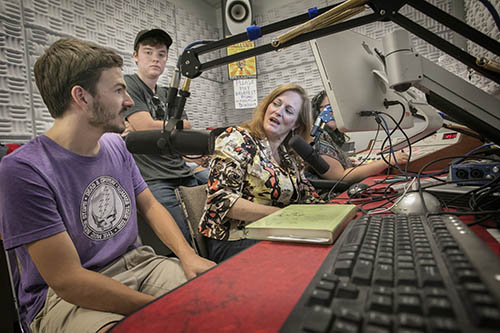 “I’m happy and honored to get this award from my colleagues in the industry. They have a sense of what I do because they do it themselves,” said Isobel Breheny-Schafer, who has been the assistant director of Student Media and General Manager of WUSB 90.1FM at Stony Brook University for the past 11 years.

The award, the College Media Advisers Four-Year School Broadcast Adviser Award for 2017, acknowledges that Isobel went well beyond the normal scope of her duties, especially during the past year.

Her predecessor, Norman Prusslin, who served as WUSB general manager and broadcast adviser until Isobel took over that role, described her responsibilities this way: “In addition to advising WUSB and SBU-TV, she advises the non-broadcast media organizations at Stony Brook and not all broadcast advisers at colleges have those additional tasks.”

“She coordinated the move of the WUSB studios from one side of campus to the other and completed the final steps in activating the station’s second frequency, a simulcast of 90.1FM on 107.3FM,” Prusslin said.

In nominating her for the award, Peer Education Program Coordinator Kathleen Valerio noted that she co-hosts WUSB’s “Taking Care of Yourself,” a weekly talk-show format broadcast that supports students and staff efforts and promotes health and wellness at the University.

Valerio also lauded her fundraising efforts and emphasis to heighten student awareness of supporting positive fundraising results. “Isobel is a tireless champion of those supporting Public Radio, non-profits and mentorship of our next generation of broadcast professionals.”

Most recently, Isobel completed the training and certification process of becoming as QPR Gatekeeper instructor in the Suicide Prevention program.

Perhaps Isobel invests so much time in Stony Brook because the University is such an integral part of her. She began working as a student on campus in 2001 and became a graduate assistant for the Department of Student Activities and the Department of Recycling and Resource Management before becoming a professional staff member in 2006.

A professional member of the College Media Advisers Association since 2006, she penned a local newspaper feature column titled, “A Banquet of Ideas” and currently blogs about food and other topics with “Cooking in the Kitchen with Bella. Additionally, she hosts a weekly public affairs and entertainment show along with two of her student advisees, called, “Campus Connect.”

Isobel is a Stony Brook alumna with a Bachelor of Science degree in business management and minor in media arts, a Master’s degree in liberal studies and a graduate certificate in information systems management. Additionally, she has completed 24 credits of MBA with the College of Business.

Somehow she also managed to find time to sit on more than a dozen campus committees during 2016-2017.

“I feel that my role is to empower students to become more effective communicators and non-biased reporters,” Isobel said. “I strive to let students follow their hearts and their passions while guiding them to think critically and to be ethical in their decision-making.”

Prusslin summarizes her value to the Stony Brook community in saying, “She is an outstanding adviser, mentor, teacher and role model to her students, combining the best mix of an academic and professional industry approach to her work. This past June at the WUSB-FM 40th anniversary reunion she was recognized for her outstanding commitment to students and contributions to the quality of campus life.”