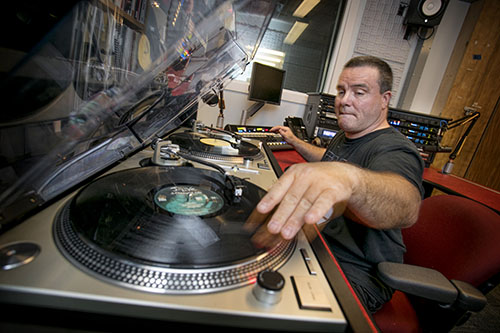 WUSB has been staffed by over 2,000 volunteers since its first sign-on, remaining a voice in the campus community while playing acclaimed artists and inviting newsmakers, public figures and educators to participate in live broadcasts.

“For forty years, WUSB has been a source of continuous programming and served as a leader in college radio,” said Jeff Barnett, Stony Brook’s Interim Associate Dean of Students.

Ranked No. 6 Nationwide
BestColleges has ranked WUSB as sixth best college radio station best in the nation. The key to this success is the effort and dedication of the radio station team. Some, such as Norman Prusslin, Faculty Advisor and former General Manager of the station for 28 years, have been involved with WUSB since the station’s origin forty years ago.

“The dedicated team of students, volunteers, faculty and staff and community members continue to introduce us to new music and new ideas,” said Barnett. “Generations of Seawolves have found WUSB to be a safe haven for the creation and experimentation of inventive and independent music.”

Located on the second floor of West Side Dining on Stony Brook University campus, WUSB transmits its signal from a tower located at Bald Hill in Farmingville. The signal reaches beyond Long Island to the southern part of Connecticut.

Staying in tune
The radio station also provides vital on-campus hands-on experience for students and has led to employment opportunities in major US media outlets such as Sirius Radio as well as a variety of other public relations, communications, media, music and journalism careers.