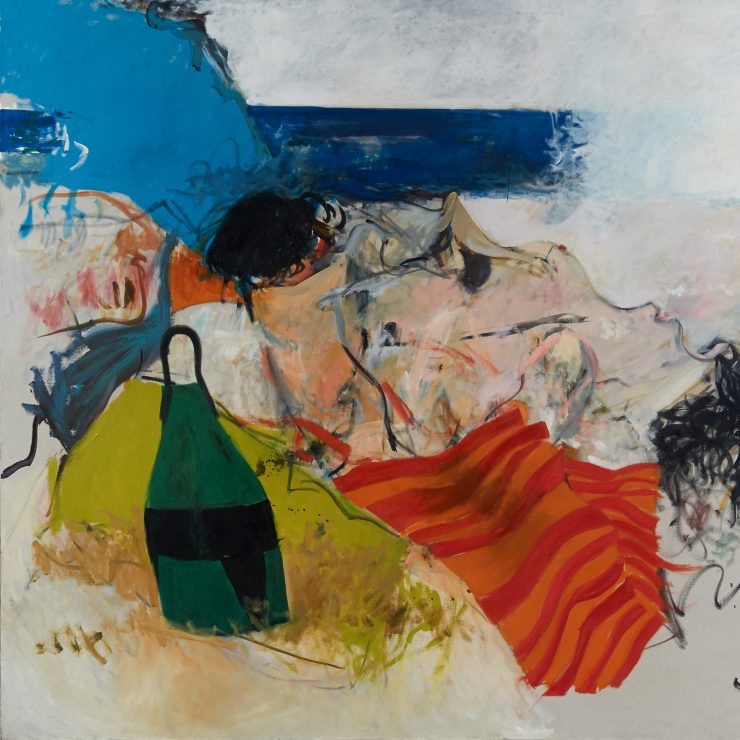 A selection of 11 paintings and works on paper by Walter Plate (1925-1972), one of the foremost young American abstractionists to emerge after World War II, will be on view at the Pollock-Krasner House and Study Center from August 1 through October 31. The exhibition includes works inspired by Plate’s frequent visits to Long Island’s East End, where he associated with members of the older generation of abstract painters, including Adolph Gottlieb and Willem and Elaine de Kooning.

From the early 1960s on, Plate paid annual visits to his brother William, who had a home one block from the Atlantic Ocean in East Hampton. There he would indulge his passion for swimming in the surf, observing beachgoers, and absorbing the ever-changing maritime light and atmosphere. Those experiences found their way into his paintings, even though his studio was in a wooded area far from the coast. The examples in the current exhibition, painted between 1961 and 1971, show how the artist internalized and translated his responses, using luminous color and lively gesture to evoke the East End environment.

The exhibition is organized by Helen A. Harrison, director of the Pollock-Krasner House and Study Center, and it is accompanied by a fully illustrated catalog with an essay by Plate’s son, Marc, which offers insight into the artist’s background and motivations. It is made possible by funds from the Pollock-Krasner Endowment and the Research Foundation, Stony Brook University, designated by Drs. Bobbi and Barry Coller. The works are lent by the Estate of Walter Plate, courtesy of Levis Fine Art, New York.

Plate was born in Woodhaven, New York in 1925. After serving in the Marines during the war, he studied art in Paris under the G.I. Bill. When he returned to the United States, he settled in Woodstock, New York, where he became a respected member of the art colony’s abstractionist contingent. His gestural canvases of the 1950s and 1960s were featured in solo exhibitions at the Stable Gallery, as well as five Whitney Annuals and group shows at the Pennsylvania Academy of Fine Arts, the Walker Art Center in Minneapolis, the Art Institute of Chicago, the Denver Art Museum and the Corcoran Gallery of Art in Washington, DC, where his painting, Hot House, was awarded the 1959 Gold Medal and purchase prize. His work was also included in “Abstract Impressionism,” organized by the Arts Council of Great Britain, and the 1959 “International Exhibition of Abstract Art” in Tokyo.