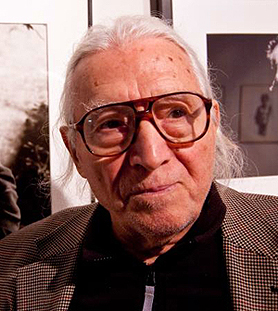 In August 1953, on assignment for Look magazine, photographer Tony Vaccaro visited Jackson Pollock and Lee Krasner at their home in Springs and photographed the two artists in the house and the barn studio. The Look article was never published, and color film from the photo shoot that was turned over to the magazine’s editor has been lost. Fortunately Vaccaro kept the black and white film, from which the 21 prints in this exhibition are taken. Few of them have been published, and many have never before been printed. They complement the small selection of Vaccaro’s images on view in the permanent exhibition inside the Pollock-Krasner studio.

There will be a reception and gallery talk by Tony Vaccaro on Sunday, August 1, at 5:00 pm. Although his pictures have appeared in publications worldwide for more than 60 years, he is primarily known for his images of World War II.