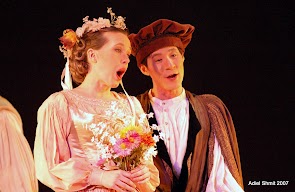 Stony Brook Opera inaugurates its 2014-15 season with “A Gala Evening of Ensembles from Opera and Musical Theatre,” a concert of famous ensemble numbers — works for two or more voices — from Italian, French and German operas and American musical theatre. The gala performance is on Friday, November 21, at 8 pm in Staller Center’s Recital Hall.

In addition to the evening at Staller Center, there will be two performances at other locations: Wednesday, November 19, 12 pm, at Berkner Hall, Brookhaven National Laboratory; and Sunday, November 23, 2 pm, Sachem Public Library.

Included will be excerpts from Act II of Puccini’s La bohème and Mozart’s Die Zauberflöte (The Magic Flute). The Puccini segment consists of well-known duets and an emotional quartet from the dramatic third act. The opening scene and selections from Act I and II will be performed from The Magic Flute, highlighting some of the opera’s fantastical action and including celebrated arias sung by the main characters Papageno, Tamino and Pamina. The program will also include duets and other featured numbers from Bizet’s Les pêcheurs de perles (The Pearl Fishers), Rossini’s Cenerentola (Cinderella), and Délibes’ Lakmé. Musical theater will also be featured, including two duets from Kurt Weill’s Street Scene. The gala evening concludes with the seductive “Habañera” from Bizet’s Carmen.

Performers include artist-in-residence Brenda Harris in the role of Lakmé. Also performing on the opera gala program are leads from the recent Main Stage production of Benjamin Britten’s Turn of the Screw from last season, including sopranos Tory Browers and Jennifer Sung, who sang the Governess and Flora, respectively; mezzo sopranos Kristin Starkey and Gloria Park, who portrayed Mrs. Grose and Miss Jessel, and tenor Christopher Reames, who sang the role of Peter Quint. Joining the cast are new additions to the doctoral program, tenor David Guzman and lyric baritone Joseph Han.

The program will be sung in the original languages, with projected titles in English, accompanied by pianists Annie Brooks and Bowei Chen, both doctoral students in the Department of Music. Timothy Long, who conducted The Turn of the Screw, will be conductor and music director for this gala program.

Tickets are $10 general admission, and $5 students/senior citizens for the Stony Brook performance on Friday, November 21, at 8 pm in the Recital Hall. For tickets call (631) 632-ARTS or order online at www.stallercenter.com. For more information call the Department of Music at (631) 632-7330.

Annual event will show 24 films over 12 weeks; passes available now Independent film lovers can still get their fix of top features from around the world when the now-virtual Stony Brook Film Festival opens on September...

The new name aligns more closely with the School's expanding degree programs and with the increased demand for professionals from communication-related disciplines.