Step it Out Heather Monaghan, Pride of Stony Brook 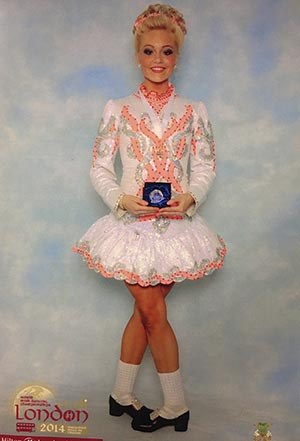 In a roundabout way, being an Irish Step Dancer led Heather Monaghan ’19 to Stony Brook University.

In 1996, at the height of Riverdance fervor, Heather was only three but her parents introduced her to the discipline on VCR. She would try to mimic the intricate steps of the performers she saw on tape and by age four, her mother thought she was good enough to sign her up to attend the Mulvihill Lynch School of Irish Step Dance in Ronkonkoma.

“It was as if a whirlwind swept me up,” Heather says. By the ripe old age of 7 Heather was already performing at the highest level and attended her first national and regional championships.

Some of her competitions took place here at the Student Activities Center and when she looked around she was wowed by the size and splendor of the Stony Brook campus.

When she wasn’t dancing Heather dreamed of someday being a doctor and the image of Stony Brook was engrained in her memory bank. Through the years she became aware of the University’s stellar research and science reputation.

When it came time for her to graduate from Sachem North High School in 2014, Heather decided earning an associates of arts degree through the Suffolk County Community College Honors Program ’16 would provide a gentle transition to Stony Brook, which it has, and where she enrolled this semester.

Heather’s intensive training and preparation for competition was the perfect precursor to embarking on the pre-med career path. Heather won her first North American National Championship title at the age of eight. To qualify, she went up against the top 40 to 50 girls in each region from the United States.

“I was still too young at the time to understand the prestige that came with the title.”

That appreciation came age 13 with her second national title, following several years of placing within the top three of her age division.

At age nine Heather began concurrently competing on an international level, placing ninth in the British Nationals. After that finish she was poised to compete in the most prestigious Irish step dancing event in the world, Oireachtas Rince Na Cruinne, Gaelic for “competition of the world.” At 11 she took the stage in Glasgow, Scotland, at the Royal Concert Hall.

The time commitment to remain at the top of the competition was significant, requiring dance class five times a week, extra practices with her mother and private lessons from student teachers.

And by the time Heather was a junior in high school at age 16, and in the thick of preparing for college and taking Advanced Placement courses, her world championship ranking took a direct hit, dropping roughly 60 places.

Faced with the most difficult decision of her young life, she chose to continue to dance. “I worked harder than I ever had in the year that followed, won my fifth regional title and that confirmed my love for the sport,” she says.

These days she balances dance training, her academic coursework at Stony Brook, waitressing at an Irish restaurant in East Islip and teaching young dancers.

In a few weeks, Heather will don her requisite “giant curly wig,” have her face painted to competition specifications and wearing her hand custom-made hand-embroidered costume made by the Irish company, Siopa Rince, and her leather and fiber glass shoes, will head to Dublin Ireland in early April to compete in her 11th world championships.

Dancing has prepared Heather for the academic commitment that lies ahead in pre-med. “I owe most of my life skills to dance,” she says. “From time management, stress management, punctuality, confidence and my work ethic, I cannot thank my dance teacher, Debbie Lynch Webber and Irish dance enough.”