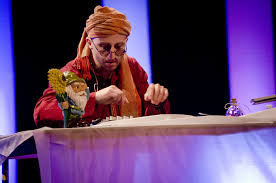 During the fall semester, Happenings will feature a series of nine, three-minute musical performances by students in the Department of Music at Stony Brook University. The “Sounds from Studio A” series was filmed, created and edited on campus in Studio A at the Video Studio.

“We developed the series and contacted Michael Hershkowitz in the Music Department to have him coordinate the musicians,” said Bill Cusick, Senior Video Producer/Director for Stony Brook University’s Video Production Group. “Our goal is to give the students and a few employees some more exposure, and we hope to continue the series with additional recordings in the upcoming months.”

This first video in the series is “Are You Smiling,” a video mix featuring The Sultan of Good Vibes, Rich Fantasia.

Since introducing the world to The Sultan of Good Vibes during his TEDxSBU presentation in 2013 (viewable on YouTube), Rich Fantasia (aka rich(e)rich, pthelo) has built a loyal following of friends and fans with his “Always Super Vibing” DJ sets of funked-up, Eastern-influenced, pumping house grooves. He has performed his original compositions and inspired DJ sets for thousands of fans in a wide range of venues from clubs, bars, outdoor festivals and raves to yoga studios, art exhibitions and installations, and even at a Buddhist Temple.

First introduced to piano by his grandfather at age 5, Rich has spent his life exploring sound and expanding his instrumental abilities to include bass, guitar, drums and assorted percussion, as well as exploring a variety of ethnic instruments including kalimba and dulcimer. His passion for engineering, composition and sound design (over straight instrumental performance) was first tapped when introduced to sampling and analog synthesis in the early 1990s. Having been exposed to the experimental sounds of Industrial and Electronica artists such as Skinny Puppy, Aphex Twin and Orbital, and with a thirst for learning the techniques for creating these sounds, Rich began formal studies of Music Education at Adelphi University and Audio Engineering at Five Towns College.

In this installment of Sounds from Studio A, Bill Cusick and the Stony Brook University Video Production Group have captured a live performance of The Sultan’s original composition “Are You Smiling?” — an upbeat, hook-laden, good vibes track that you’re sure to have stuck in your head after hearing it.

Rich, as The Sultan, is honored to share his musical vision, joy of sound design, and good vibes with the campus community and beyond. Be sure to keep an eye out for The Sultan of Good Vibes debut EP, Are You Smiling?, which will be released digitally on iTunes, Spotify, Amazon Music, etc. in late Fall 2015.

You can explore more of Rich’s DJ sets and original compositions at soundcloud.com/pthelo and soundcloud.com/the-sultan-of-good-vibes. Be sure to follow him on Facebook to keep up with new releases and upcoming gigs. 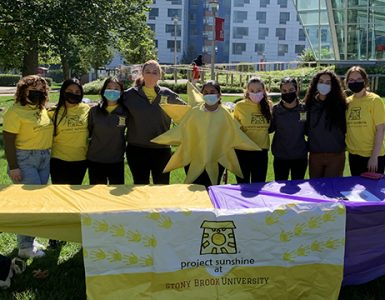 Project Sunshine has partnered with the Faculty Student Association (FSA) to organize and host a fun and interactive event to help children at Stony Brook Children’s Hospital. On Wednesday, December 1, head over to East...

The Stony Brook Film Festival (SBFF), presented by Island Federal, returns to Staller Center for the Arts, July 21-30. For film and pass information, visit stonybrookfilmfestival.com. Now in its 27th year, the Stony...