SB Film Festival to Open with “No God No Master” 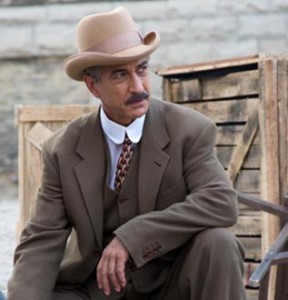 “No God No Master” from writer/director Terry Green and Strata Productions will make its world premiere on opening night of the Stony Brook Film Festival on Thursday, July 19, 2012. A strong ensemble drives this dramatic feature about social unrest in post-World War I America and the Sacco and Vanzetti saga. David Strathairn stars as William J. Flynn, the Anarchist expert assigned to find saboteurs during the summer of 1919. Ray Wise is Alexander Palmer, the stridently anti-Communist U.S. Attorney General at the time.

Film Festival Director Alan Inkles welcomes Green’s third film to Stony Brook. “We are delighted to open the Stony Brook Film Festival with “No God No Master,” a beautifully produced feature with an outstanding ensemble of actors. As Terry Green notes, ‘The disintegration of civil liberties during times of social unrest is nothing new in America.’ Stony Brook is proud to bring such a timely, riveting film to our audience for opening night.”

The 17th Annual Stony Brook Film Festival will host filmmakers at Staller Center from Thursday, July 19, through Saturday, July 28, 2012. The Stony Brook Film Festival is a highly regarded, highly competitive festival, screening outstanding independent dramatic features, documentaries, animated films and shorts. The ten-day festival produced by Staller Center showcases one film at a time to houses of 850 to 1,000 filmgoers. The complete Film Festival schedule will be announced at the end of May.

This year's Series features 13 independent films you won't see anywhere else and presents award-winning and record-breaking films from around the world.

Chosen for their involvement in the organization DonatePPE.org, siblings Karen Tsai and Kevin Tsai presented the Best Supporting Actor award at the 72nd annual Emmys on September 20.