Quirky Yarn/Wire Concerts are a Summer Tradition at Stony Brook 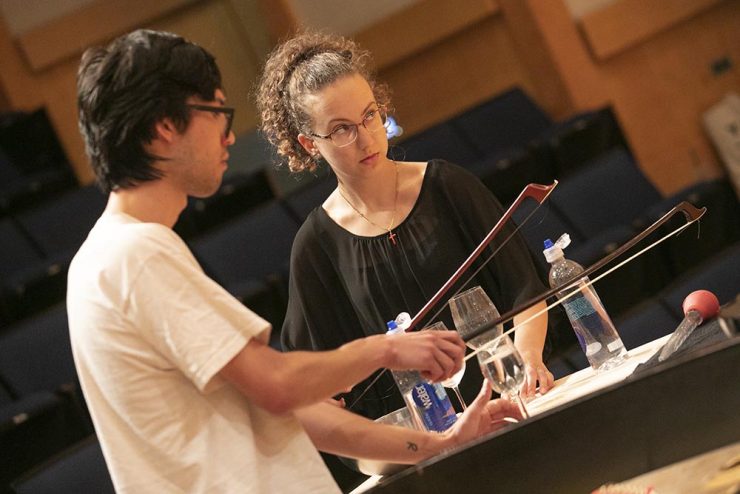 If your musical tastes run a little out of the ordinary – or if you’re just in the mood to hear something new –  this summer’s Yarn/Wire concerts might well fit the bill.

Billed as the “world’s most adventurous music,” the Yarn/Wire Institute comes to Stony Brook University annually, enabling collaboration between some of the country’s most talented student performers and composers.

Its intriguing name comes from the New York City-based piano and percussion quartet, formed in 2005 by SBU graduate students, that runs the program. “Yarn” refers to percussive mallets that are often wrapped in yarn, while “wire” refers to the strings of a piano, said Ian Antonio, percussionist and founding member of Yarn/Wire.

SBU students and faculty are involved in the program each summer. While both students and faculty hail from all over the U.S. and the world, SBU faculty members Matthew Barnson, Margaret Schedel and Daniel Weymouth have all been associated with the Yarn/Wire Institute. Current SBU percussion students Rob Cosgrove and Chris Howard serve as the administrative and logistical staff.

Cosgrove, a third-year doctoral candidate in percussion performance at Stony Brook, credits Yarn/Wire as one of the reasons he chose to enroll at Stony Brook. “When I heard they were starting a summer program, it was a no-brainer to attend,” he said.

Though his role is exclusively administrative this year, Cosgrove participated in the performance portion of the program in 2018.

“Last year, participants formed collaborative groups and created projects from scratch, whether it was a composition, an improvisation or artwork,” Cosgrove said. “This was an empowering exercise that really got my creative juices flowing. It is very exciting to be involved in bringing works of art to life. Composer participants write pieces for the institute and then they receive a premiere performance of the work by the end of the ten days.”

“It also confirmed to me that the greatest music is often the product of a close collaboration, whether that is between musicians or between a performer and a composer,” he said.

This year, another SBU student, Alexandra Lamastra, Master of Music student in Piano Performance, is participating.  Lamastra said that she had never played contemporary music previously and saw it as a chance to broaden her musical horizons.