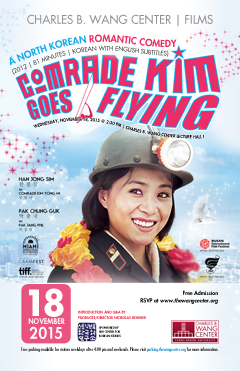 The Charles B. Wang Center at Stony Brook University is presenting the North Korean romantic comedy Comrade Kim Goes Flying, including a post-screening discussion with Director/Producer Nicholas Bonner on Wednesday, November 18, at 2:30 pm in Lecture Hall I. Admission is free.

Comrade Kim Goes Flying is a unique film about a young woman coal miner who pursues her childhood dream to be a trapeze artist against all odds. This is the first feature film with an all North Korean cast to be co-produced with Western partners and to be completely edited outside of North Korea.

Unlike most North Korean films, in Comrade Kim Goes Flying, the protagonist is a strong female character with a self-confident individualistic personality, and there is no interference of state propaganda. The film wins audiences over with elements of mischief, humor and romance. The actors — Han Jong Sim as comrade Kim Yong Mi, the central character, and Pak Chung Guk as Pak Jang Phil, the supporting male character — are professional trapeze artists who trained in an intensive acting course for the film. North Korea provided the script, cast, crew and music, and the Western partners provided the equipment and post-production. It took six years for the film to be approved and made for the North Korean audience, and it was edited outside of North Korea to remove state control.

British filmmaker Nick Bonner produced the BBC documentary The Game of Their Lives, about North Korea’s success in the 1966 World Cup. Bonner says Comrade Kim Goes Flying was in part inspired by the popular film Bend It Like Beckham.