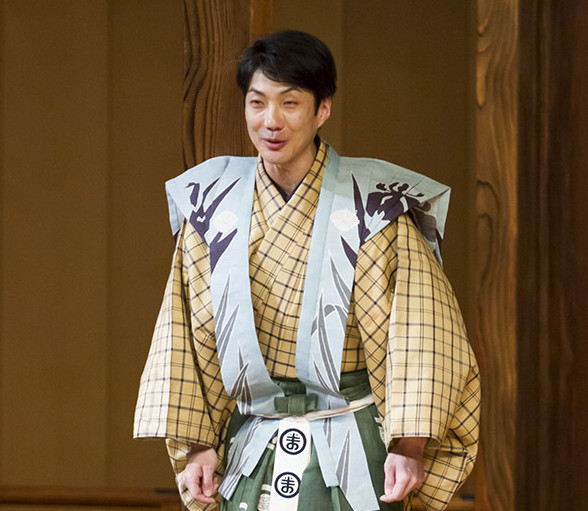 The Charles B. Wang Center at Stony Brook University will present Kyogen: Japanese Medieval Comedy on Tuesday, December 8, at 6 pm performed by The Mansaku-No-Kai Kyogen Company. The show will be followed by a conversation with Mansai Nomura, son of the company’s founder, and Professor Izumi Ashizawa, Stony Brook University Department of Theatre Arts. Tickets are $10 for general admission and $5 for students and seniors; children 12 and under are free. You can purchase tickets online at www.thewangcenter.org or at the door.

The Masau-no Kai Kyogen Company was founded by Mansaku Nomura II, a Living National Treasure of Japan, and is now also led by his son, Mansai II, part of a 250 year-old theatrical family line. Kyogen is one of the four representative classical theater arts of Japan, which includes Noh, Bunraku and Kabuki. Kyogen is a medieval popular comedy founded in the early 14th century in Kyoto, which became integrated into the middle of each Noh play. Mansaku has been a pioneer in sharing Kyogen, as both a traditional and contemporary art, with audiences around the world.

Mansai Nomura Ⅱ studied under his father Manskau Ⅱ and his late grandfather Manzo Ⅵ (both Living National Treasures of Japan). He made his stage debut at the age of 3. He has performed in Greek tragedies and Shakespearean plays as well as starring in hit Japanese movies such as Ran by Akira Kurosawa and Onmyoji by Yohjiro Takita. He is also a director of classic and contemporary plays and received the Asahi Performing Arts Award and Kinokuniya Theatre Award 2005 for his direction and composition of Atsushi.  He received the National Arts Festival New Artist Award and the Ministry of Education’s Art Encouragement Prize for New Artists.