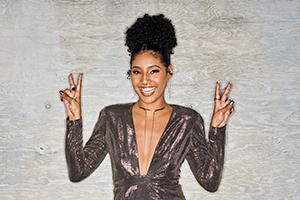 Kelsea Johnson ’17 is ready for you to hear her Voice…live!

And having the Stony Brook University community at her back, she says, is both comforting and inspiring.

Just under a year after earning her bachelor’s degree from Stony Brook’s College of Arts and Sciences in just three years with a dual major in Psychology and Sociology, the native of Newark, Del. will sing live on NBC on Monday night, April 16 during the Live Playoff round of the network’s hit singing competition The Voice.

A member of “Team Alicia,” coached by 15-time Grammy winner Alicia Keys, Johnson has earned raves during the earlier pre-recorded rounds of the competition for her performances of songs that include Meghan Trainor’s “Like I’m Gonna Lose You” and Andra Day’s “Rise Up.”

Along the way, she’s withstood challenges from her fellow competitors on Team Alicia, and now, she’s ready for the homestretch in pursuit of a $100,000 cash prize and a Universal Music recording contract.

We recently spoke with her as she prepared for the live show.

“Rise Up” is a song that’s been sung on previous seasons of The Voice, along with other singing competitions. How much of a challenge was it to take the song and make it your own, make it different than what other singers have done with the song?
This song is heavily covered, so I really wanted to make sure I made it my own. I wanted to bring a more emotional aspect to the song, and make sure that I was doing the song and the lyrics of the song justice. Alicia was really helpful with that, because she told me to channel in the lyrics of the song and what it means to me and how I could relate to it. That day, I was very emotional, and I think I really just tried to channel that. I wanted to make the arrangement build, so that you guys felt the emotion that I felt when I was trying to sing it. I wanted to make it my own so that I could give off the emotion that the song was written with.

You were in a singing competition here on campus when you took part in SB Idol. How useful was it to have been part of the SB Idol competition? Is it so different that there’s really nothing you can take from one to the other?
Being in SB Idol was a really fun experience. I think that it can be comparable to what I’m doing now, on a smaller scale, just the fact that you are in a singing competition. On campus, you’re meeting a bunch of singers that you never knew sung, meeting people and having fun sharing your talent. On the show, I’m meeting people from all over the country that I would never have met otherwise, and I didn’t know any of the other people who were on SB Idol before I auditioned for it. That’s very comparable, and just the aspect of it being a singing competition: when the pressure is really on, you have coaches or judges in front of you, and you’re really just singing to a crowd of people. SB Idol was a nice little pre-Voice experience, to be in another singing competition.

This time last year, you were getting ready to graduate, thinking about the future. If someone asked you, “What do you think you’ll be doing in a year,” what do you think your answer would have been?
I wouldn’t have said The Voice. I wouldn’t have said national television. I knew that I wanted to have a gap year, because I did graduate a year early.  I was going to take that gap year before I got my master’s – which is what I planned on doing – and I knew that I wanted to move to California and pursue a singing career. I thought, “During this gap year, I can dabble in something that I’ve always had a passion for, now that I have my degree.” For me, it was really about timing: I’m going to take this year off from school anyway, so I might as well make it useful.

When you look at the photo of you in our Stony Brook cap and gown that ran on the show before your performance in the Knockout Round , what are some of your favorite memories from Stony Brook that come back?
Oh my goodness. I have so many memories from Stony Brook. I love it there, and I miss it dearly. I actually met my boyfriend there, and my two best friends, Nikkhalia McFarlane and Kian McKoy. We spent so much time on that campus and I just have so many great memories. Actually, the day that I took that picture, Kian McKoy is the one who took that picture because she loves photography, and Nikki and I were graduating together, so we took pictures that day. Just the thrill of getting our cap and gown, we said, “Whoa, this is really happening, we’re about to graduate,” and it was so awesome, just being there that day. If I set foot on campus again now, I would just be so nostalgic, because I have so many great memories.

The shows that aired to this point finished taping in January. Between then and now, obviously, you can’t tell people what’s happening with the show, but what’s life been like waiting for these shows to air?
I’ve been really anxious. I think that’s the best word I can use. I couldn’t wait to be able to share with people the news that I’ve known for so long now. Now, the timeline has caught up, and I can post things in real time with the other contestants. Since October, I haven’t been able to say anything, just wait until everything airs on television. Now that everything’s finally aired, finally, you guys know just as much as I do, and I’m so excited for the live shows. I can’t wait. We can all take the next step together. It’s so awesome.

So, what fills the days between taping the show and these live shows starting on Monday?
During the majority of that time, I went back home. I was spending time with my family, and being able to watch the show with them, enjoying my time before I go back for the live shows. Now, I’m back in LA, rehearsing. We’re really preparing ourselves for these live shows, because it’s a whole different ball game compared to the pre-recorded shows.

You’ve talked about how helpful Alicia Keys has been to you. When you sang your blind audition, she was the last coach who turned her chair around; Adam Levine turned 12 seconds after the vocal came in, but you had to sing another minute to get Alicia to turn. Was that something that you were thinking about as you were singing? What was going through your mind?
Going in, obviously, you have a plan: best case scenario, you turn all four chairs, who are you going to choose? I had always told myself I was going to pick Alicia. When I was on stage, and I saw Adam and Kelly [Clarkson] turn, I was ecstatic, but even then, it’s so hard to talk about that time, because I was so into my song. It just seems like a snap of the fingers and it was over. Apparently, as soon as Alicia turned, I pointed to her. That’s what my mom said. I didn’t even notice that I did that, but I was so excited when she turned. It was like a sigh of relief when she turned. After that, I didn’t know who to go for; the other coaches were making great points, but I went with my gut with Alicia.

As the shows have aired, you’ve been replying to and retweeting a lot of the support you’ve gotten from Stony Brook, the Alumni Association, and the College of Arts and Sciences. When you see those messages of support coming, what are some of the things that come to mind?
I’m so thrilled! It makes me feel great to know that my alma mater is standing right behind me, supporting me. The first tweet that I got made me say, “What? Stony Brook knows who I am?” It’s a huge school, we all know this, and to think, Stony Brook knows who I am out of all these people, it’s really exciting. They’re so supportive, reposting me, posting things on their own, and the words of encouragement are awesome, knowing Stony Brook has my back.

Obviously, you’re trying to win, but what are you most looking forward to about getting back into it with the live shows?
I’m really just excited to start singing again. I haven’t really done it since the knockout rounds. I’m excited to get back on stage. The stage is gorgeous, and this is a whole new level, and I’m just excited to be able to experience that, all of the behind-the-scenes stuff, and see how it unfolds.