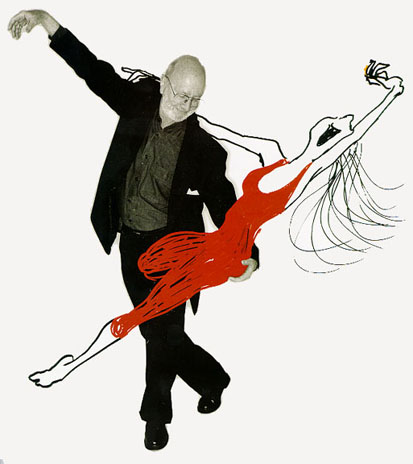 Jules Feiffer’s The Dancer Films previewed on July 6, 2011, during opening night of the Stony Brook Southampton Writers Conference Screenwriting Conference. Feiffer, a cartoonist, playwright, and screenwriter, is a faculty member in Stony Brook’s MFA in Writing and Literature program.

The film, directed by Judy Dennis, is a collection of six very short films based on the modern Dancer, an iconic cartoon character that first appeared in Feiffer’s weekly comic strip for The Village Voice in 1957. Two years later the strip was syndicated, and it ran until 2000. Dancer Andrea Weber from the Merce Cunningham Dance Company brings the character to life in the film.

The Dancer Films is also being shown as part of the River to River Festival in Manhattan from now through July 17 at the World Financial Center.

Feiffer’s creative endeavors range from his Obie-winning play Little Murders, to his screenplay for Carnal Knowledge, to his Oscar-winning anti-military short subject animation Munro. Some of his other works include the Tony nominee Knock Knock, and the Pulitzer nominee Grown-Ups, as well as his screenplays for Popeye and I Want to Go Home, best screenplay winner at the Venice Film Festival. He has also written several children’s books.