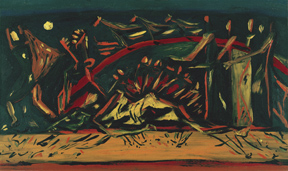 To commemorate the 2012 centenary of Jackson Pollock‘s birth, the Aichi Prefectural Museum of Art in Nagoya, Japan, is presenting “Jackson Pollock: A Centennial Retrospective,” an exhibition of more than 60 of his works, including all those in Japanese collections and loans from around the world. Organized by Aichi curator Tetsuya Oshima, the exhibition will be on view in Nagoya through January 22, after which it will travel to the National Museum of Modern Art in Tokyo from February 6 through May 10, 2012.

Among the outstanding overseas loans are Birth (1941) from the Tate Gallery, London; Totem Lesson 2 (1945) from the National Gallery of Australia; Number 7 (1950) from the Museum of Modern Art, New York; Number 11 (1951) from the Daros Collection, Switzerland; and Number 7 (1952) from the Metropolitan Museum of Art, New York. The show’s highlight is Mural on Indian Red Ground, a 1950 masterpiece from the collection of the Tehran Museum of Contemporary Art, which has not been seen outside Iran since the revolution.

The Pollock-Krasner House and Study Center is represented in the show by one painting, two prints, and artifacts from the house and studio, as well as a full-scale replica of the studio that features a photographic reproduction of the paint-spattered floor.

The PK House painting, Untitled (Composition with Red Arc and Horses), is an early work that illustrates Pollock’s debts to Picasso, Orozco, and Native American Art. It hangs in the first gallery, where the human skull from Pollock’s studio is also on view. In the next gallery, shards of colored glass from the studio are displayed next to his only mosaic, made in the late 1930s for the WPA, in which the glass was used. At the exhibition’s conclusion, paints, brushes and other studio materials, and the broken anchor that hangs in the house, are among the featured exhibits. In the lobby, a video takes visitors on a tour of the Springs property.