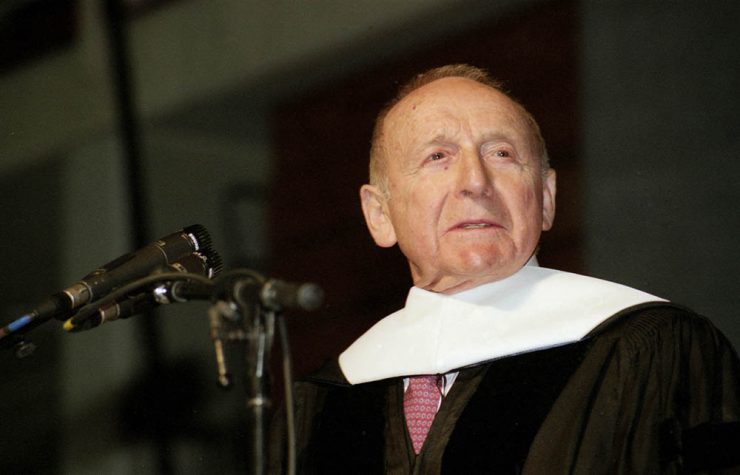 “As we reflect on Erwin’s myriad contributions in time and treasure to benefit our students, faculty, staff and our community, though I will miss him dearly, I am inspired by Erwin Staller’s vision and focus, and in the knowledge that his powerful legacy will live on at Stony Brook for generations to come,” said Stony Brook University President Samuel L. Stanley Jr.

Born in 1921, Staller was an innovative entrepreneur in Long Island’s commercial real estate market. He was a WWII veteran and served five years in the U.S. Army. In 1988, Erwin Staller and the Staller family gave the University its first million-dollar donation, a $1.8 million gift to what became the Staller Center for the Arts, helping create a foundation for the Staller’s legacy of philanthropy at Stony Brook University spanning 35 years.

Staller family members and friends joined Erwin in supporting the mission of the Staller Center for the Arts. Over the years, these gifts allowed the Center to flourish and grow into a popular cultural entertainment hub on Long Island’s North Shore. He and his family have generously contributed more than $16 million to Stony Brook, most notably reflected in the growing prominence of Staller Center and the high quality of its programming.

Stony Brook awarded Erwin Staller the Stony Brook Medal for Extraordinary Service in 1989 as well as an Honorary Doctorate of Humane Letters in 2001. He was also honored at the 2006 Stars of Stony Brook Gala.