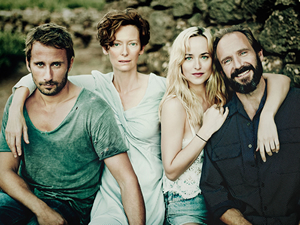 The Staller Center’s Friday Night Film Series brings great movies to Stony Brook at an even better price. All films are shown on the Main Stage, which has the largest movie screen in Suffolk County. Passes for all 10 films for the fall are available in person at the Staller Center Box Office for a discounted price of $30. Individual tickets are $10 for adults; $7 for students, seniors and children; $5 for Stony Brook students. Click here to buy tickets.

Friday, September 30
A Bigger Splash, 7 pm
The vacation of a famous rock star and her filmmaker boyfriend is disrupted by the unexpected visit of an old friend and his daughter. With Tilda Swinton, Matthias Schoenaerts, Ralph Fiennes.

The Fits, 9:30 pm
While training at the gym of the local community center, 11-year-old tomboy Toni, played by mesmerizing newcomer Royalty Hightower, finds herself drawn to the girls dance troupe. Just as she settles into this new world, the girls begin to be afflicted with mysterious fits.

Friday, October 7
The Last King, 7 pm (in Norwegian with subtitles)
Norway is ravaged by civil war as the recently deceased King’s infant son is guarded by two men while warring factions seek to kill him and take control. A historically-based snowbound adventure, directed by Nils Gaup.

Equals, 9 pm
In an emotionless utopia, two people fall in love when they regain their feelings due to a mysterious disease, causing tensions between them and their society. With Nicholas Hoult, Kristen Stewart.

Captain Fantastic, 9:15 pm
Viggo Mortenson gives a brilliant performance as a father devoted to raising his kids with a rigorous physical and intellectual education, until a tragedy forces him to move them out of his self-styled paradise and into the modern world.

Friday, November 4
Café Society, 7 pm
Set in the 1930s, a young man moves from the Bronx to Hollywood, falls in love with his uncle’s secretary, and returns to New York where he is swept up in high society night life. With Jesse Eisenberg, Kristen Stewart, Steve Carell.

Southside With You, 9 pm
This charming film chronicles a 1989 summer afternoon as young Barack Obama woos senior law firm colleague Michelle Robinson on an epic first date across Chicago’s South Side. The perfect antidote for the election weary.

Morris From America, 9 pm (in English and German with subtitles)
The romantic and coming-of-age misadventures of a young African American teenager trying to adjust to his new life in Heidelberg, Germany, along with his single father. With Craig Robinson, Markees Christmas.