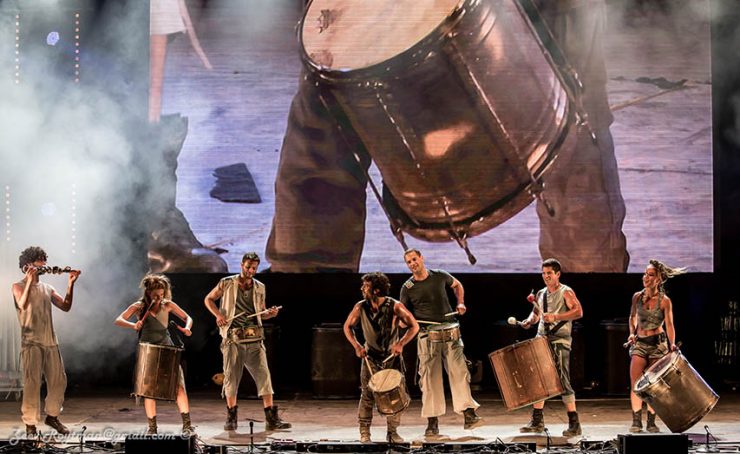 Mayumana, a theatrical music and dance sensation from Israel, brings “Currents” to Staller Center for the Arts at Stony Brook University on Saturday, March 9, at 8 pm in a performance inspired by the historical ‘’Battle of Currents” between Thomas Edison and Nikola Tesla in their quest for finding energy sources for the world. Tickets for Mayumana on the Staller Center Main Stage are $48 at stallercenter.com or by calling (631) 632-ARTS. Discounts are available for students, seniors and children.

The troupe from Tel Aviv takes the audience on a playful journey between two sets of performers, each representing a different view of the essence of light and electricity. Each is inspired by a different esthetic and artistic approach, presented as a dialogue through unique sounds, lights and visual effects.

Mayumana combines specially made musical instruments, drums and massive video art projections including video mapping on the walls of the Old City of Jerusalem. The 11 skilled performers are in constant movement, musically juggling between different sounds.

The name Mayumana comes from the Hebrew word for skill, Meyumanut. Founders Elyon Nuphar and Boaz Berman were driven by their deep love for percussion and music and created the first Mayumana show. The multicultural cast members inspired each other to showcase each individual’s area of expertise while developing in all players the versatility to master other skills.

Science Exhibit to Complement “Currents” at Staller Center
Adding to the fun will be an exhibit from the Tesla Science Center at Wardenclyffe, the historic site of Tesla’s former laboratories in Shoreham, NY. The Tesla Science Center will have a display of electrifying exhibits in conjunction with Mayumana’s “Currents.” Attendees will see Tesla coils in action and explore hands-on displays featuring magnetic machinery, augmented reality, electrical exhibits, theremin and robotics. The Tesla’s Inventions exhibit will be open to explore for an hour before and after the “Currents” show and during intermission.