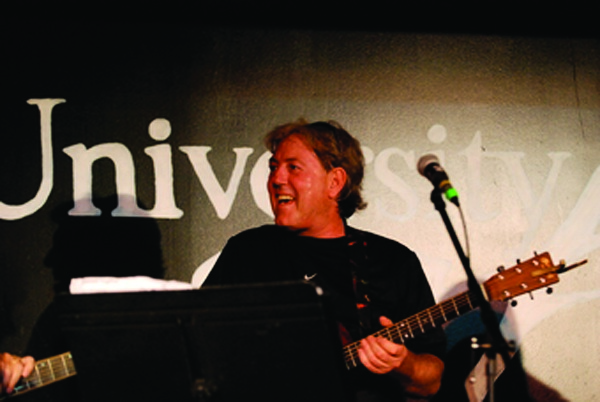 On Wednesday, November 3, during Campus Lifetime (12:40 pm to 2:10 pm), Caroline Doctorow and Russ Seeger will be performing the music of Bob Dylan at the University Bookstore. Seeger and Doctorow are popular local artists who have recently performed at the University Cafe’s Sunday Street Acoustic Concert Series. The Sunday Series is a live rock and folk music concert series inspired by WUSB’s popular Sunday Street Program. Professor Charlie Backfish, the host of the Sunday Street Program, will be hosting the concert at the Bookstore.

The event celebrates the release of a new CD that highlights the Bob Dylan Birthday Celebrations of 2008 and 2009 at the University Café. The live concert CD features versions of Dylan songs by The Kennedys, Rod MacDonald, Pat Wictor, Russ Seeger, Caroline Doctorow, Johnny Cuomo, and Rob Stein. The CD will be available for purchase at the event, and both Caroline Doctorow and Russ Seeger will sign copies. The CD is also available at the Seawolves MarketPlace and www.shopsbu.com.

Doctorow is a Bridgehampton native whose influences include Joan Baez and Tom Paxton. Her latest album, Another Country, is a tribute album to the work of Mimi and Richard Farina.

Seeger, a Huntington native and member of the Last Hombres with Levon Helm, is also a devoted Dylan fan. He favors some of the more usual parts of the Dylan catalogue, including works like “George Jackson,” “Abandoned Love,” and “Odds and Ends.”

The concert is free to all Stony Brook students, staff, and faculty members who would like to attend. Light refreshments will be served. For more information, visit www.facebook.com/stonybrookbookstore.