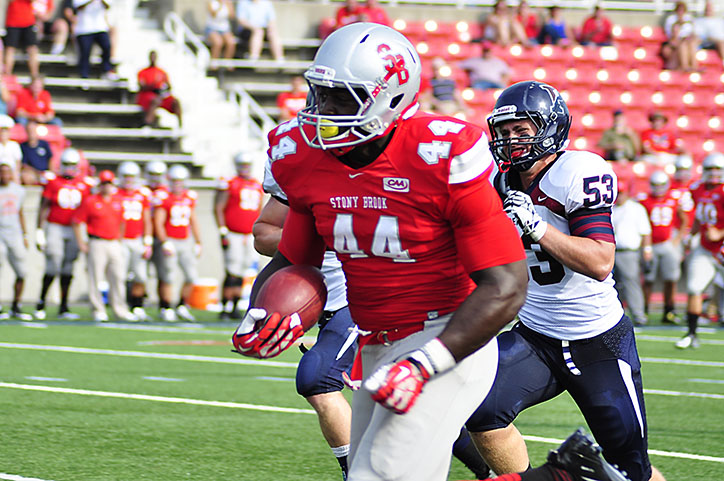 Stony Brook football alumnus Will Tye will get another chance to play in the NFL after signing to the Philadelphia Eagles practice squad on Tuesday, November 14.

Tye, who played two seasons on the Stony Brook football team, is best known for playing as the starting tight end for the New York Giants from 2015 to 2016.

Tye transferred to Stony Brook from Florida State prior to the 2013 season, after he was originally recruited by the Seminoles in 2010. The tight end recorded a total of 79 receptions for 1,015 yards and nine touchdowns in his two-year career as a Seawolves starter. His best performance came in 2014 against North Dakota, when he set a single-game career high with 103 yards on five catches. Tye was not selected in the NFL Draft in 2015, but signed with the Giants as an undrafted free agent and earned his spot on the practice squad before being promoted to the active roster.

Tye became the first football player from Stony Brook to play in the pros when he made his NFL debut on October 4, 2015. His first touchdown came off a pass from Eli Manning on a Monday night game against the Miami Dolphins. Tye completed his rookie season with 42 receptions for 464 yards and three touchdowns in 13 games.

Tye’s 2016 numbers were less than impressive – 48 receptions for 395 yards and one touchdown in 16 games. He was later released by the team in September 2017 during its final roster cuts. The New York Jets claimed him off waivers the following day, and he caught four passes for 38 yards in three games before getting cut in October. Tye spent the remainder of the season as a member of the New England Patriots’ practice squad but was let go in September 2018.

Now 27 years old, Tye has been given an opportunity to return to the NFL, this time for the rival of the team that originally gave him a shot.

“You just wish you had a fair chance,” Tye said about the Giants in a January interview. “When I first came there they treated me nice, they treated me fair. It was a good two years there.”

Tye will get another chance as he reports to practice for the Eagles, as he is now the fifth tight end on the depth chart. The Eagles currently have Zach Ertz, Dallas Goedert and Josh Perkins on the active roster, while Richard Rodgers is listed as a reserve.