What Penguins Can Tell Us About Climate Change 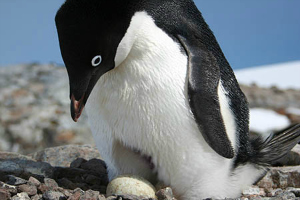 In a June 25 episode of Sunday Night With Megyn Kelly, NBC News’ Harry Smith journeyed to Antarctica and spoke with Stony Brook’s Heather Lynch about the signs penguins might be giving us about climate change.

Dr. Lynch called penguins the “canaries in the coalmine” of global warming. “All the species on the planet are going to have to deal with climate change,” she said. “It’s not just an Antarctic issue. But these penguins are dealing with it now.”

Lynch and her team count the numbers of various penguin species in order to track the impact of climate change. Her research is focused on uncovering the population dynamics and biogeographic distribution of penguins and other Antarctic seabirds, with a particular focus on untangling the effects of climate change, fishing, and tourism. Dr. Lynch has been at the forefront of using high-resolution satellite imagery to map penguin occupancy and abundance across Antarctica. These data are improving our understanding of penguin biology and their response to climate change.