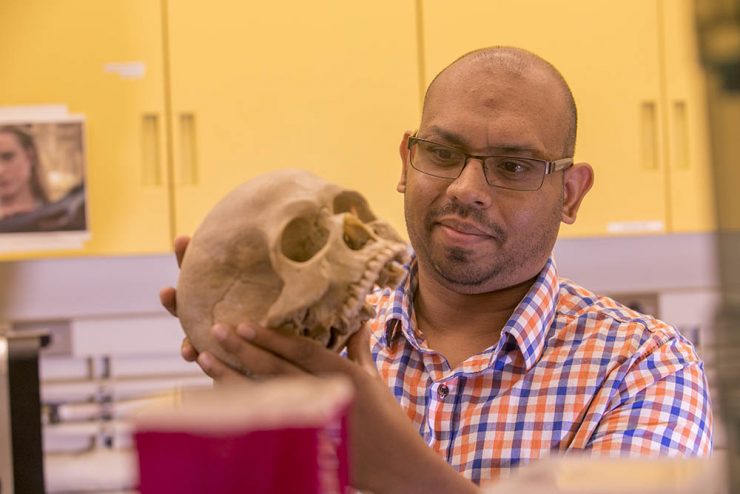 Krishna R. Veeramah will be continuing his pioneering research into ancient DNA with funding from a $10 million grant awarded by the European Research Council (ERC).

The ERC’s 2019 Synergy grants include funding for a multidisciplinary study of more than 100 ancient medieval cemeteries across Central Europe aimed at illuminating  the history of ancient migration and mobility in the Carpathian Basin. More than $2 million will be allocated to Veeramah’s lab at Stony Brook, which will lead the genome sequencing, bioinformatics, and population genetic analysis as part of a team of international scientists.

Veeramah, an assistant professor in the Department of Ecology and Evolution in the College of Arts & Sciences, specializes in paleogenomics. His DNA analysis has already provided important insight into European history, including recent studies of early medieval skulls in southern Germany and the emergence of the modern dog from a population of gray wolves during the Neolithic era.

“This funding will help to advance our decade-long international collaboration that seeks to better define migration and settlements across Europe at a crucial time in history,” Veeramah said. “The project is unprecedented in its scale and will provide a high resolution understanding of how modern Europe was formed after the fall of the Roman Empire.”

The European Research Council, set up by the European Union in 2007, is the premier European funding organization for excellent frontier research. Every year it selects and funds the very best, creative researchers of any nationality and age to run projects based in Europe. The ERC has three grant schemes for individual principal investigators – Starting Grants, Consolidator Grants, and Advanced Grants – and Synergy Grants for small groups of excellent researchers.