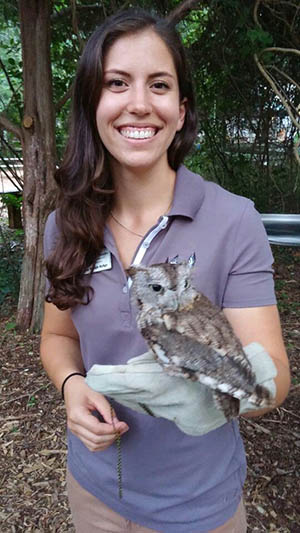 As every Biology 101 student knows, symbiosis is a mutually beneficial relationship between two different entities. That’s a good definition of the ties between the Quogue Wildlife Refuge and Stony Brook University.

The refuge actively recruits its interns at Earthstock because of Stony Brook’s focus on sustainability. The unpaid intern position is for 10 to 20 hours per week for a college student studying environmental, educational or animal-related sciences.

“Our experience with Stony Brook students has been great — they’ve always been excellent interns,” says Assistant Director Marisa Nelson. “They are dedicated to their field of study, and luckily for us have knowledge about relevant environmental issues.”

Some of Stony Brook’s students have also found employment with the 305-acre non-profit nature preserve to be a perfect fit.

Cara Fernandes ’16 of Baiting Hollow, New York, started at the refuge as an intern during summer 2014 as a co-educator for the Little Naturalist summer camp program.

These days she coordinates and teaches educational programs about Long Island’s native plants, animals and ecology to a variety of audiences. She also cares for permanently injured wildlife, feeding them and administering medicine.

Her stewardship during her academic career at Stony Brook includes stints as president and secretary/event coordinator of the Long Island Water Environment Association, where she planned and executed events such as beach cleanups. As an eco-leader with the Office of Sustainability on campus, she participated in numerous recycling events and tree plantings. Cara also encouraged young students to pursue a career in marine and atmospheric science as a volunteer in the National Ocean Sciences Bowl Region Competition, the Bay Scallop Bowl, held on campus.

“Seeing so many students, faculty and professionals excited about the environment increased my interest in my career path, especially after attending the Indianapolis Prize nomination lunch for Carl Safina and Patricia Wright,” says Cara.

Cara developed a love for the natural world because her father encouraged her sister and her to accompany him on hikes across Long Island.

What she most loves about her job at the refuge is teaching children and visitors about the environment.

“My job at Quogue Wildlife Refuge was a happy accident. I had graduated from Stony Brook and was having trouble finding a position that suited my interests,” Kimberly says.

She recommends that students contemplating careers in the environmental sciences take advantage of internships. “Many nature organizations on Long Island are small places and they remember people who put their time in there and care.”

At the refuge, Kimberly maintains social media accounts, oversees catalog donations and assures that all donors receive proper acknowledgment. She also plans the Refuge’s annual benefit gala, feeds and cares for animals, educates the public, and facilitates promotional planning and events. “The great thing about working here is that we all wear so many hats,” she adds.

During the spring and fall, the refuge sends representatives to educate the public at fairs, including Earthstock, where Quogue Wildlife Refuge staffer Tony Valderrama appeared the last three years.

“We usually bring an animal based on specific conditions like the weather and the duration of the program we are featuring,” Tony says. “From my experience people, love all animals but owls are a favorite, probably because they’re so elusive but vocal in their nocturnal behavior.

“The interaction between the students and the wildlife is priceless,” he adds. “My hope is that these simple interactions become a catalyst for future environmentalists. We are lucky to have the best interns every year who come from Stony Brook to work with us.”