Track and Field Has Record-Setting Weekend 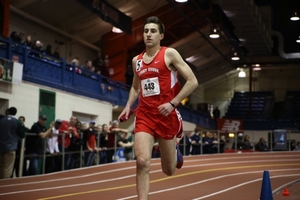 Stony Brook Men’s and Women’s Track and Field traveled to Boston for the America East Championships this past weekend. The men came in fourth place out of the nine America East teams, while the women finished in second.

“Today was by far the best first day for our men’s program in this meet,” head coach Andy Ronan said in a press release. “All of our guys competed very hard. The highlight has to be the three guys in the 5000m; [senior Danny Connelly, sophomore Cameron Avery and senior Michael Watts] took three of the top four spots. All three of them crushed the school record. We advanced a big group to tomorrow’s finals, and our men’s distance medley relay produced a top class finish on the night.”

Avery, Connelly and Watts competed in the 5,000 meter on Friday. All three finished with faster times than Stony Brook’s previous record of 14:10.36, set by Tim Hodge in 2009.

Watts competed once again in the men’s 3,000-meter run, where he captured the victory with a time of 8:20.25 seconds. His first-place performance was the top-ranked finish for the men’s team throughout the championship.

“On the women’s side, [sophomore] Alyssa Oviasogie was the one that set the tone with a great second place finish in the Pentathlon,” Ronan said. “[Senior] Kaylyn Gordon produced another quality performance in the long jump to finished second, she was followed by [junior] McKyla Brooks with a fourth-place finish.”

Oviasogie finished the pentathlon with a score of 3,272 and Brooks recorded a 5.77-meter long jump, finishing in the top five.

Stony Brook’s success continued on Saturday in the second day of the America East Championships.

Manning, Sisson, senior Tiana Guevara and junior Melissa Riback came out on top in the women’s 4×800 meter relay with a time of 8:58.19 seconds.

Stony Brook will travel to the IC4A/ECAC Championships at Boston University March 2 through March 4.