The Statesman Celebrates Its 60th Anniversary 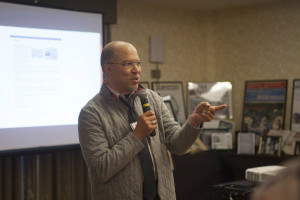 Sixty years after The Statesman was first founded, reporters and editors from the past and present gathered at the Hilton Garden Inn to celebrate the campus paper’s diamond anniversary.

“Stony Brook is bound by very little tradition,” Executive Director of Alumni Relations for Stony Brook, Matthew Colson, said.. “If there’s one thing that has been a constant through all this change, it’s The Statesman telling the stories of everything that has happened on campus.”

Looking back at their formative years, many of those in attendance recalled how their time at The Statesman shaped their lives and careers going forward.

“This is a really overwhelming experience for me,”  David Joachim ‘93, now a financial crimes editor for Bloomberg News, said. “I found myself at The Statesman. It wasn’t just I found my career, I found who I was.”

The Statesman is the oldest organization in Stony Brook’s history, having been established as The Sucolian in 1957 when the then-State University College on Long Island opened in Oyster Bay.

Prior to the 2006 establishment of the university’s School of Journalism, the campus paper served as the only training ground for student journalists, save for a few isolated reporting classes.

“In those days, there was no journalism program on campus,” Jonathan Salant, Statesman editor-in-chief from ’74-’75 and Washington correspondent for The Star-Ledger in New Jersey, said. “If you wanted to do journalism, you had to do Statesman. The joke was I got my degree in political science, but my major was Statesman.”

Time and time again, the alumni from the early days of The Statesman touched on the impact made by the late Martin Buskin. Buskin, a longtime education editor for Newsday, came to invest his time and energy in the fledgling paper after he was contacted by its reporters. For years, Buskin would work as an adjunct professor at Stony Brook, teaching nighttime journalism classes and working with The Statesman to foster an entire generation of reporters.

“There are a number of journalists in this room who started out in Marty’s courses,” Larry Bozman, editor-in-chief of The Statesman from ’72-’73, said. “Marty was one of those sparks that led to a lot of people becoming journalists. We had a truly great mentor.”

During Buskin’s tenure as mentor of the paper, The Statesman printed 36 pages of news a week in three issues, a density of coverage surpassed on Long Island only by Newsday itself. Buskin’s former protégés credited their success to the high standards he set for them.

“Marty Buskin was an instrumental part in the lives of everybody at The Statesman, especially the editorial board,” Leonard Steinbach, former news editor and principal of Cultural Technological Strategies at Johns Hopkins University, said. “Knowing that we had him looking over our shoulder really brought out the best in us. He would meet with us in our office and just tear us apart. I still remember him saying ‘Steinbach, you can do better than that!’ And we did.”

Though a heart attack in 1976 brought about Buskin’s death at the age of 45, his legacy lives on in the form of the Martin Buskin Award for campus Journalism, awarded annually in several categories to Stony Brook students whose work demonstrates excellence in campus reporting.

Arielle Martinez, 2016 Buskin Award recipient and current editor-in-chief of The Statesman, reflected on the paper’s past while looking toward its future.

“It means so much to me that I get to lead the paper at such a critical point in its history,” Martinez said. “The Statesman is not just a club, it’s a community forum, it’s a chronicle of campus life, it’s a training ground for new journalists. As we transition to a digital-first outlet, it means so much to me that what I do now could affect the paper for the next 60 years.”