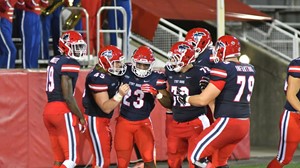 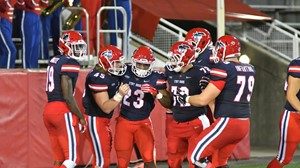 The “Long Island Express” has been rolling over opponents during the Stony Brook football team’s three straight wins and the duo of senior running backs Donald Liotine (Medford, New York) and Jordan Gowins (Bellport, New York) look to lead the Seawolves against Villanova in the CAA Football top 20 showdown at Kenneth P. LaValle Stadium. Kickoff is set for 6 pm.

Stony Brook (3-1, 1-0 CAA Football) enters Saturday’s game ranked 17th in the AFCA Coaches Poll, while the Wildcats (3-1, 0-1 CAA Football) sits 14th in the same poll. This will be the first matchup of top 20 teams in LaValle Stadium since Villanova (18th) visits the Seawolves (10th) in the first round of the NCAA Playoffs on November 24, 2012.

THE SERIES
This will be just the third meeting between the two CAA Football programs and the second as league opponents. Stony Brook defeated Villanova in the opening round of the 2012 NCAA Playoffs in LaValle Stadium, while the Wildcats got past the Seawolves in Philadelphia in Stony Brook’s second CAA Football game ever in 2013. (Complete series history on page 6).

QUICK HITTERS
• The Seawolves opened their sixth season as member of CAA Football last week. Stony Brook is now 5-1 in the previous conference openers.
• Stony Brook is 10-10 in season openers since moving to Division I in 1999. The Seawolves have won three of the last five openers, including the 13-9 victory over North Dakota that opened the 2016 season.
• The Seawolves improved to 9-4 in home openers under head coach Chuck Priore with last week’s win over Bryant.
• Stony Brook’s captains for the 2018 season are senior QB Joe Carbone, senior TE Cal Daniels, senior LB Shayne Lawless, senior LB Noah McGinty and senior DL John Haggart.
• Senior TE Cal Daniels was named preseason STATS FCS All-American.
• Stony Brook, who finished the 2017 season ranked 11th in both polls, sit 17th in the AFCA Coaches poll and 18th in the STATS poll this week.

IN THE RANKS
The Seawolves are ranked in both polls for the 10th straight time this week. Stony Brook sits 17th in the AFCA Coaches’ poll and sits 18th in the STATS FCS poll this week.

CAA FOOTBALL OPENERS
Stony Brook is in its sixth season as a member of CAA Football. The Seawolves kicked off the conference slate last week when Richmond visited LaValle Stadium. The Seawolves improved to 5-1 in the conference openers since joining the league, including the 36-10 win over Richmond. A win at URI in 2013, an OT loss at home to No. 13 William & Mary in 2014, a victory at home over No. 13 New Hampshire in 2015, a home win against No. 2 Richmond in 2016 and a 35-18 victory at URI last season are the results.

AGAINST THE FCS RANKS
Stony Brook in 9-19 all-time against FCS ranked opponents with the victories over No. 12 New Hampshire and No. 17 Richmond in 2017. The Seawolves’ also posted two ranked wins in 2016. Stony Brook earned a 42-14 win over No. 2 Richmond and a 13-9 season-opening victory against No. 19 North Dakota. Richmond’s No. 2 ranking equals the highest ranked opponent to come into Kenneth P. LaValle Stadium (No. 2 Towson on September 28, 2013). The win over Richmond also marked the program’s first victory over a top 10 team.

HOME OPENER
Stony Brook opened the home potion of the schedule with the first of five games in LaValle Stadium on September 8. The Seawolves are now 9-4 in the home opener under head coach Chuck Priore, including a victory over Sacred Heart last season.

LIOTINE ALSO CLIMBING THE CHARTS
Senior RB Donald Liotine sits in the top 10 of several career offensive categories entering the Villanova game. He is fifth rushing carries, sixth in all-purpose yards, eighth in rushing yards and ninth in rushing touchdowns. The Medford, New York, native needs 162 all-purpose yards to slide up to fifth, 46 carries to move into fourth, two rushing touchdowns to move up to a tie for seventh, and 101 rushing yards to climb up into seventh.

BLOCK AND TOUCHDOWN, AGAIN
Stony Brook’s special teams have blocked six punts for touchdowns in the past three-plus seasons, including one against Bryant on Sept. 8. The Seawolves accomplished this at USF and against Sacred Heart in 2017, against North Dakota and William & Mary in 2016 and at Rhode Island in 2015.

PICK SIX, TWICE…MAKE THAT THRICE
Stony Brook has returned three interceptions for touchdowns this season. Against Bryant, sophomore DB EJ Fineran tipped a pass and proceeded to scamper 79 yards for the touchdown in the second quarter, while junior DB Damarcus Miller did him one better and snagged a pass on the five-yard line and took it to the house, 95 yards later as time expired in the fourth quarter. Junior DL Jordan Scarbrough got into the pick-six game against Fordham when he picked off a pass and scampered 25 yards for the score.

HOW ABOUT A SCOOP-SIX?
Junior DB Gavin Heslop decided he wanted to join in on the defensive touchdown caravan when he scooped up fumble and raced 87 yards for a score in the first quarter against Richmond. It marked Stony Brook’s fourth defensive touchdown of the season and the first fumble return for a TD since the 2016 season.

LONG RETURNS
Junior DB Damarcus Miller and sophomore DB EJ Fineran had interception returns for touchdowns against Bryant and both cracked the record books in the process. Miller’s 95-yard return is the third longest pick-six in school history and the longest since Ernie Williams’ 99-yarder against St. Francis on November 17, 2001. Fineran’s 79-yard pick-six is the fourth longest pick-six and fifth longest interception return in the program’s history. DB Gavin Heslop returned a fumble 87 yards against Richmond for the longest fumble return for a TD.

UP NEXT
Stony Brook will travel to Towson next Saturday for a 4 pm kickoff at Unitas Stadium in the CAA Football matchup. The Seawolves won’t return home until October 20 when Rhode Island invades LaValle Stadium for Homecoming.