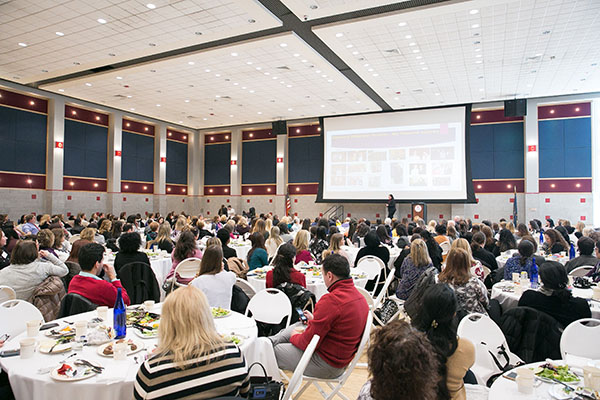 Florence DiStefano Hudson knows what it’s like to be in the minority. For decades, she’s worked her way to the top in a variety of STEM positions traditionally held by men.

Hudson, an entrepreneur, aerospace engineer and thought leader in the fields of technology and gender equality, offered advice to more than 400 people who gathered at Stony Brook’s 2018 Women’s Leadership Symposium held March 14.

“We need to get [ourselves to a place of]  greater human population parity. If women are half of the population, then we should make up half of all roles — nurses, teachers, engineers, astrophysicists,” Hudson said in her keynote speech.

The symposium is the third event of its kind to be held at the University, said organizer Patricia Aceves, assistant provost and senior director at Stony Brook’s Center for Excellence in Learning & Teaching (CELT). The day-long conference focused on the unique experiences and challenges of working women.

“The idea began with a Presidential Mini-Grant for Diversity Initiatives in 2012-13, along with financial support from the Division of Information Technology (DoIT),” Aceves said.

“The original idea was to form a Stony Brook Women’s Leadership Network that would include mentoring circles and events like the symposium,” said Aceves,  “The Network didn’t really take off, but the symposium was and continues to be a huge success.”

Following the first symposium, the President’s office provided financial support for subsequent events through the Brookhaven Science Associates (BSA) and support from staff in Conferences and Special Events, Aceves said. This year’s planning committee was also composed of volunteers who attended previous events.

The symposium gives both women and men the opportunity to network and learn from women representing a variety of backgrounds who have excelled in their careers. Attendees could choose from 19 workshops held during four, hour-long sessions. The workshops tackled a wide range of issues, including negotiation, finance, work-life balance and nutrition.

Hudson was trained as a mechanical and aerospace engineer. Her early career included work with solar-powered satellites, the NASA space program and future missions to Jupiter. She then moved into information technology, where she spent 33 years working for Hewlett Packard and IBM in multiple leadership positions. Hudson is now the Special Advisor to the Northeast Big Data Innovation Hub for Next Generation Internet at Columbia University, and serves on the editorial board of the journal Blockchain in Healthcare Today.

In addition to her successful career in technology, Hudson overcame a number of personal challenges — she never knew her father, and her mother died in childbirth, leaving Hudson to be raised by her grandparents. Later in life, she faced criticism by teachers and employers because of her success. One person even told her he wished a man had won an award she received.

“One of the patterns that I see is that even though I have all these cool things that I’ve done, people still look at me like, ‘What could you possibly know?’” Hudson said. “But we all have things that make us unique and valuable. Our job is to determine what those gifts are and use them for good every day.”

Feedback after the event was enthusiastic, with attendees calling the workshops relatable and useful.

“I’ve been to the symposium in the past, and this year I really liked that they offered workshops about work-life balance and diet,” said DoIT Client Support Specialist Kathryn McDonald. “I think that events like these are important for everyone, including men, to be a part of. We need to do everything we can to support each other, and I’m leaving today with strategies for greater inclusion at work.”

Dr. Marina Charitou, an endocrinologist for Stony Brook Medicine, said, “I went to a journaling workshop, which I really enjoyed. It was something I used to do, and I’d like to start again. I think it’s particularly important at a big university like ours to have opportunities for different departments to come together. I’m hoping that I can take some of the tools I’ve learned today and teach them to residents and fellows at the hospital.”