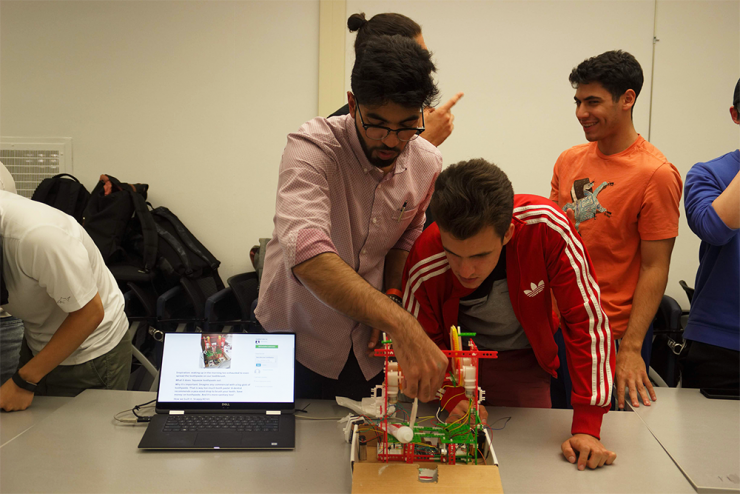 Over 300 students from across Stony Brook University and beyond gathered at SBUHacks, the university’s first official Major League Hacking (MLH) hackathon, on Friday, September 14.

MLH organizes 200 hackathons each year around the world, according to the organization’s website. The hackathons pit teams of students against each other, giving them between 24 and 48 hours to work on an innovative coding project of their choosing. At the end, students present their work to a panel of judges.

The Center of Excellence in Wireless and Information Technology (CEWIT) and other departments within Stony Brook have hosted local hackathons in the past, but never one of this scale. Demir and Sondhi plan to make this an annual event on campus.

“I think it was always sidetracked because of trying to get admin approval and all that in place. So it was really great to have admins having our back this time, because they finally recognized hackathon culture as something very important for this school,” Sondhi said.

Students took over the Central Reading Room in Frank Melville Jr. Memorial Library from 5 pm on Friday to 7 pm on Saturday. Huddled in clusters around their laptops and available tables, students collaborated and worked on their own unique projects, typing lines of code to create web pages, smartphone apps and more.

Tanya Sengupta, a sophomore information systems major, worked with her team to create a dating app related to zodiac signs and astrology.

The competition offered awards and prizes for both hardware and software projects, called hacks, through different categories such as most entrepreneurial hack, called “Rocketing Finances Hack,” and the best health hack, called the “Zero G Medicine Hack.” Officials from the sponsor companies as well as administration, faculty and alumni from CEAS administration, judged the 45 hacks that were presented on Saturday evening.

Best Security Hack was awarded to Get Off My Lawn, created by a team of students from Johnson and Wales University in Providence, Rhode Island who major in cyber threat intelligence and defense. This was their second hackathon at Stony Brook after attending one at the CEWIT earlier in the year.

They “went and took steps of how we learned how we can prevent it, so we’re using two different APIs [application programming interfaces], to create a multilayer authentication,” Morales said. “Making it harder for that kind of exploit to happen on a user’s computer,” he said.

APIs are a software class that allow two applications to talk to each other, according to freeCodeCamp, a website that teaches how to code for free.

Hackathons provide a space for students to network with companies, allowing participants to discuss potential internship and job opportunities with sponsors like Softeon and MSC Industrial Supply. Each sponsor had its own table with freebies, such as stickers, to hand out to students.

Sondhi said that CEAS Director of Development, Min Um-Mandhyan, was a huge help in getting the event off the ground.

Um-Mandhyan said getting the administrators to understand hacking culture was the biggest hurdle to cross.

“[Getting everybody on the same page] was the hardest part, and after that, and honestly working with student groups, the administration was very supportive,” she said.

Um-Mandhyan also intentionally sought to increase female representation in the field of computer science through SBUHacks.

“Nationally, we have about 17 percent female students in the computer science major, and that’s actually a dire situation,” she said.

About 30 percent of SBUHacks participants were female, with a handful of female-only teams, Um-Mandhyan said.

“It was basically an accessible, fast-acting, interactive, laugh-out-loud website that you could use to reinforce the organic chemistry material from your lectures,” Gabrielle Caporusso, a sophomore biology major on the team, said.

Hacking culture is important to students like Demir and Sondhi because hackathons are for students, by students. In classes students are limited, “but when you leave the bounds of the classroom your imagination, innovation, and thoughts and ideas take form into a project that you probably never would have seen before if you just sat in class all day,” Sondhi said.

A previous version of this article mistakenly identified Sondhi and Demir as founding members of the Stony Brook Computing Society.