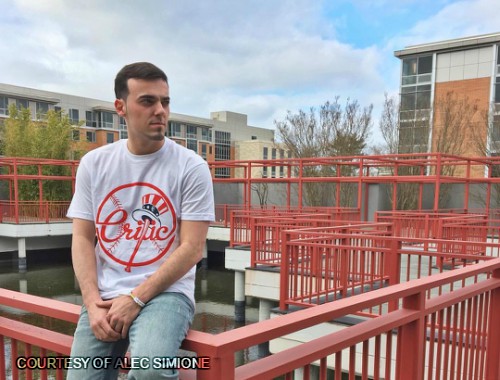 Alec Simione is a Stony Brook student whose company, Critic Clothing, is rising through the ranks of the streetwear industry.

Simione, a senior majoring in business management and marketing, has gone through life always looking for ways to make a name for himself. At the age of six, he took up skateboarding as a hobby and grew up immersed in the skateboarding culture. When he decided he wanted to create a clothing line, he infused his roots of skateboarding, a source of his favorite memories, into the brand.

Since the fourth grade, Simione and his friends made their own small made up companies and started “sponsoring” each other by selling each other small items. However, this playful endeavor became serious for Simione. He reached out to larger, established companies for sponsorship, but only started to hear back from them when he became a talented skateboarder. At that point, he received free boards and energy drinks.

Simione grew up around skate shops. In fact, when he made the first designs for Critic, he sold them to kids he knew at the skate park he worked at. Selling 50 shirts in the first month, Simione knew he had something special.

He describes his brand as “streetwear that is skate culture based, mixed with hip-hop and is, of course, New York influenced.”

The inspiration for his clothing designs came from other skate brands such as Emerica, which focuses more on footwear than apparel. The company’s professional style has also influenced how Simione runs his company. When he was little, he would email them and they would always email him back. One time, they even sent him two pairs of shoes and a hoodie. Now that he has his own company, Simione tries to carry that example forward,making his best effort to respond to kids that reach out to him whether it is by email or Instagram direct message.

“I love it when kids reach out to me because I know what that’s like,” Simione said.

Not only does he have the support of college friends, he has reached out and built good relationships with athletes in professional sports. Some of his friends in the NFL include Orleans Darkwa of the New York Giants, Anthony Johnson of the New York Jets and Daren Bates of the Tennessee Titans.

He reached out to some NFL rookies on Instagram and formed a close relationship with a few of them when they plugged his clothing on their Instagrams without asking for money. In return, Simione has always been willing to help them out, helping Darkwa put together a foundation camp and designing the website for it. MLB players like Mookie Betts, an outfielder for the Boston Red Sox, have helped Critic with promotion. Betts even wore the clothing brand for a Rolling Stone interview as a favor. Simione recalls when Betts sent him a link for the article and says it was “one of the most surreal moments of my life.”

He travels to every interview for his clothing line with the same passion and love for what he does as he did the first day he started. Simione says he wants to be a role model to kids so he doesn’t put any drugs or alcohol in his clothing brand because he knows all about the pressures that middle school and high school kids face. Simione’s advice to anyone looking to start their own artistic business is to save up money, keep bouncing back from the failures and setbacks and just do it.