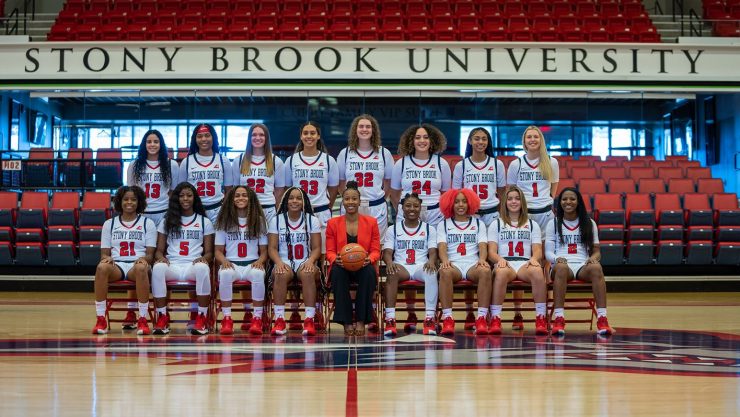 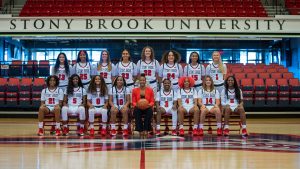 The Stony Brook University women’s basketball team, the defending America East Champions were picked to finish first in the 2021-22 Women’s Basketball Preseason Coaches’ Poll as announced by the conference office on Wednesday. The Seawolves earned six first-place votes and 78 total points in the preseason poll. Additionally, graduate forward India Pagan and senior guard Anastasia Warren were both tabbed to the Preseason All-Conference Team.

“It shows a lot of respect for the league that we were predicted preseason No. 1. For me, it’s not about where you start, it’s about how you finish. It’s a lot of tremendous respect from the league and for our team and it’s well-deserved. I am excited to be here, practice has been awesome. Our women are working really hard and that’s all that I can ask for. They’re competing and that’s important to us and that’s a part of my core values, we are going to get out there and compete,” said head coach Ashley Langford.

First-year head coach Ashley Langford leads the Seawolves into the 2021-22 campaign. The Seawolves earned the conference’s automatic qualifier into the 2021 NCAA Tournament where they went head-to-head with Arizona in the first round. It marked the first time in program history that the team won the America East Championship and earned a berth in the NCAA Tournament.

Pagan was tabbed to the America East Preseason All-Conference Team for the second season in a row. The forward most recently represented her native Puerto Rico in the 2020 Olympics in Japan and became the first Stony Brook women’s basketball player, and third Stony Brook student-athlete ever to compete in the Olympic Games.

For her career, she is averaging 10.2 points per game on 52.1 percent shooting from the field and 5.1 rebounds per game in 108 games (92 starts). Pagan became a member of the Seawolves’ 1,000-point club on January 17, 2021, at New Hampshire. Last season, she averaged 9.0 points per game on 46.9 shooting from the field and tallied 5.0 rebounds per game. Pagan was selected to the All-America East Second Team for her efforts as a senior.

Warren was selected to the Preseason All-Conference Team for the first time in her career. She was named the 2021 Most Outstanding Player of the America East Tournament after scoring a career-high 31 points in the title game against Maine on March 12. The 31-point performance marked the most points scored by a Stony Brook player since Mykeema Ford had 32 vs. Boston University on January 10, 2007. Additionally, she was tabbed to the America East All-Championship Team and All-America East Third Team in 2020-21.

The Seawolves tip-off the season on Tuesday, November 9, when they host Delaware State at 6:31 p.m., inside Island Federal Arena. Single-game tickets are on sale now! Be sure to purchase your tickets now to be a part of the action!