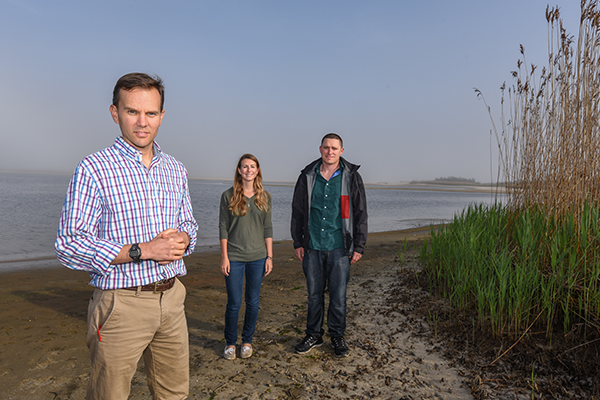 Stony Brook University has partnered with a group of homeowners from the Georgica Pond community, and the East Hampton Town Trustees, to form a public-private partnership to address water quality issues on the east end of Long Island. Local residents have raised $359,000 to support the research project, which will investigate the causes of environmental degradation and the toxic algae blooms observed in Georgica Pond over the last several years. Research will be led by Dr. Chris Gobler, a professor at Stony Brook University’s School of Marine and Atmospheric Sciences. Based on the research findings, the partnership will work closely with the Nature Conservancy to develop a plan of action to remediate the Georgica Pond eco-system. This plan will also help inform other communities in Long Island facing similar water quality issues.

Nancy Kelley, Director of The Nature Conservancy on Long Island, commented, “The research being conducted under the auspices of Dr. Chris Gobler, a world-renowned expert in harmful algae blooms, will provide information necessary to restore and maintain Pond health. This study and the subsequent actions taken by government and residents can serve as a model for how water quality across Long Island and beyond can be restored for people and nature.”

The $359,000 research project will focus on investigating the source of pollution in the pond. One of the key elements of the project will be the installation of a telemetry device that allows for continuous monitoring of multiple water quality indicators, such as the level of algae and oxygen in the water. The device will also record and send data to a web address on an ongoing basis for easy monitoring. In addition, researchers will be sample ground water and other tributaries to the pond. Finally, a graduate student will be appointed from Dr. Gobler’s lab to act as a “Georgica Pond Steward” to oversee the data collection and analysis.

“We know that the water quality conditions in Georgica Pond pose a serious threat to wildlife, pets and humans – and that it will intensify without intervention,” said Dr. Chris Gobler. “Our study is designed to identify the sources and quantify the delivery rates of nitrogen and phosphorus. Coupling these measurements with a robust characterization of the blue green algae in the Pond as well as their toxins will permit informed remedial measures to be implemented.”