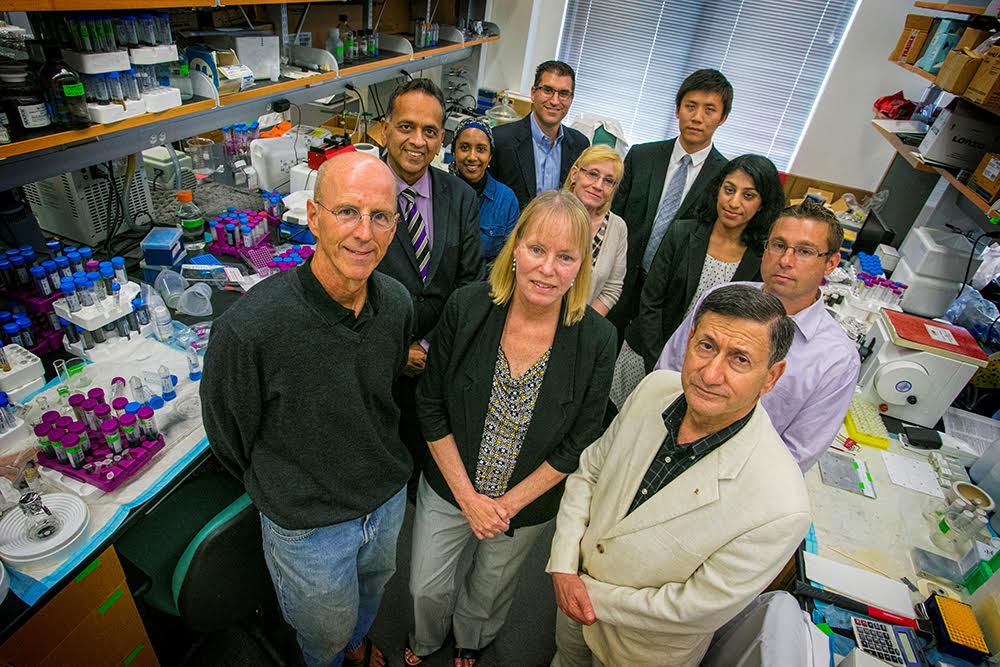 The award to establish the CIEES CAT is a $10 million award over 10 years, designed to enhance the development and integration of advanced technologies into electrical systems to accelerate the progress of renewable energy. The second award supports the renewal of Stony Brook’s existing Bio CAT with a 10-year , $10 million award to further develop biomedical innovations leading to new therapeutics, diagnostics and biomedical devices.
“This investment in Stony Brook’s Centers for Advanced Technology is a tremendous shot in the arm for Long Island and for New York State,” said Stony Brook University President Samuel L. Stanley Jr., MD. “It is a wonderful endorsement of our existing Biotech CAT and our vision for the CAT in Electrical Energy Systems. We are grateful to NYSTAR and the ESD for their continued confidence and support in our CAT programs.”
New York State CAT programs support university-industry collaborative research and facilitate the translation of innovations emerging from New York’s top research universities into viable products produced in the private sector. With Stony Brook’s new CIEES CAT, the re-designated Bio CAT, and the Sensor CAT , whose research ranges from new materials to infrared lasers to signal processing, information processing and software for sensor networks and cyber-security, the University is the only higher education institution in New York State to have received three Centers for Advanced Technology through NYSTAR’s competitive award process.

“The NYSTAR Awards will allow Stony Brook University to take its research contributions in renewable energy and health care to the next level, and ensure that even more of the innovations born on campus are able to reach the marketplace,” said SUNY Chancellor Nancy L. Zimpher. “Congratulations to President Stanley and the entire Stony Brook campus on receiving this tremendous support.”

While technologies for electrochemical energy storage and renewable resources continue to advance, there is a critical lag in the development of storage for electrical grid applications and technologies for grid integration of the stored energy, which is essential for system stability for intermittent renewables such as solar and wind-generated energy. Given that need, CIEES research will focus on developing technologies for integration within the electrical grid. This will include energy storage systems, microgrids, and transmission and distribution systems.
The goal of the new CAT will be to foster commercialization and technologies to improve the resiliency, reliability and efficiency of the electrical grid system, as well as reduce power costs for customers and the State’s carbon footprint.
“This award to develop another Stony Brook CAT is a testament to our cutting-edge research in energy, our success in transforming research results into commercializable products, and our outstanding record in working with industry,” said Yacov Shamash, PhD, Vice President for Economic Development and Dean of Engineering at Stony Brook University, and the leader of the CIEES effort. “The CIEES will also extend the campus economic development mission by growing the job market on and off campus in energy, one of the most critical economic sectors of the state, national and global economy for the 21st Century.”
The CIEES will build upon the expertise and collaboration of numerous Stony Brook and Brookhaven National Laboratory (BNL) researchers working on energy storage and electrical grid technologies. This includes research collaborations within Stony Brook’s Department of Energy-funded Energy Frontier Research Center, led by Esther Takeuchi, PhD, Professor in the Departments of Chemistry and Materials Science & Engineering at Stony Brook and Chief Scientist at BNL. Stony Brook Smart Grid R&D also received a major boost with a $25 million DOE Smart Grid Demonstration Project grant, joint with Farmingdale Stated College and then- LIPA.
“The CIEES will become a unique platform to build and improve upon the infrastructure of researchers and industry partnerships already in play,” said Benjamin Hsiao, PhD, Principal Investigator and Director of the CIEES. “This new CAT will be a gateway to routinely connect faculty with industry to leverage the development of advanced energy technologies and economic development by way of new research programs and jobs in energy enterprises.”
Major advances at the interface of medicine, biology, engineering, and the computational and physical sciences are bringing medical biotechnology to a new level to vastly improve human healthcare. Stony Brook’s Center for Biotechnology (CFB) is uniquely positioned to capitalize on this rapidly evolving bio-innovation landscape. As one of New York’s original 7 CATs, for 30 years the CFB has built research partnerships across the state to continue to accelerate the commercialization of biomedical products. The track record includes supporting all six of the Stony Brook and SUNY, drugs approved to date by the FDA. The first of these, ReoPro®, was the first monoclonal antibody drug to treat cardiovascular disease. The 3-D Virtual Colonoscopy was another breakthrough.
“We are honored to have been selected by NYSTAR to receive a 10-year re-designation to continue our efforts to translate academic technology into the commercial sector,” said Clinton T. Rubin, PhD, SUNY Distinguished Professor and Chair of the Department of Biomedical Engineering, and Director of the Center for Biotechnology. “We look forward to this next chapter to expand the creation of next generation therapeutics, diagnostics and medical devices. The partnership between New York State and academic institutions is unique, and we enjoy working with state government and the private sector to bridge difficulties that often hamper the development of discoveries.”
The initiative will also foster applied research within New York’s emerging bioscience industry and be a catalyst for the new Long Island Bioscience Hub, one of only three National of Institutes of Health-supported Research, Evaluation, and Commercialization Hubs (REACH) in the nation. The long-term contract will also help to expand the infrastructure of professional networks in the biosciences and provide the resources to train more students, post-doctoral fellows and faculty, and grow the Bioentrepreneur-in-Residence program to support new company formation for Long Island and New York State. Total support for the Long Island Bioscience Hub exceeds $8 million and is a direct compliment to the CFB mission.
Over the past 15 years, the CFB has independently documented an economic impact of approximately $1.2 billion and the creation of 1,125 jobs in the biomedical arena. According to Dr. Rubin, with the renewed CAT program and support of the NIH REACH initiative, the CFB is poised to expand biomedical commercialization and economic growth at an even higher rate and with a broader impact to health needs of society.
The CAT program was established in 1983 to spur technology-based applied research and economic development and to encourage research collaboration and innovation with industry across New York. Initially five centers received CAT designations. Since that time the program has been expanded to include 15 different centers throughout the State.