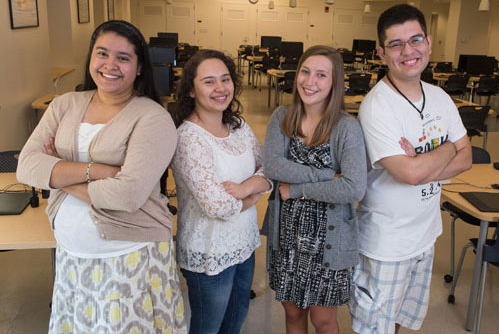 The numbers are troublesome – and by most measures, alarming.

Underrepresented racial and ethnic groups comprise more than a quarter of the U.S. population, yet they only account for 10 percent of U.S. workers in science, technology, engineering and mathematics – commonly referred to as STEM – fields. Similarly, women make up just 28 percent of the nation’s STEM workers, even though they constitute nearly half the U.S. workforce.

Fortunately, Stony Brook University has always placed an emphasis on increasing diversity in the STEM pipeline. And as government funding of STEM education continues to dwindle, philanthropists are stepping in to fill some of the void.

A $350,000 gift from an anonymous Long Island businessman and a $250,000 matching donation from the Simons Foundation established the a scholarship fund in 2013 to benefit students underrepresented in the STEM disciplines; the recipients are picked from a talented pool of Riverhead High School graduates.

An additional $1.4 million in immediate gifts and pledges from the same anonymous this year enabled a second group of scholarship recipients from Riverhead High to enroll as freshmen this fall at Stony Brook. The donor’s contributions have established an endowed scholarship fund, ensuring that future Riverhead High grads will receive the scholarship for years to come. Edgar Samudio, a 2013 Riverhead High School graduate now in his sophomore year at Stony Brook, said he had not anticipated getting the opportunity to be “fully immersed in the college experience” until he received the scholarship.

“It’s definitely been a life-changing experience,” said Samudio, 19, a computer science major. “I had not expected to be able to afford to go to a four-year institution, live on campus and share in the whole college experience.

“My older sister Amy had been forced to put her education on hold to financially assist the family, but my scholarship allowed her to return to college,” added Samudio.

“Being that my father had lost his job last year, and my mom is only working enough to pay the bills, going to college had seemed impossible,” said Leon, 18, the first in her family to attend college.

STEM students such as Samudio and Leon are on a path to success. The Brookings Institute estimates that 20 percent of all U.S. jobs require a high level of knowledge in any one STEM field, and the Bureau for Labor Statistics expects STEM jobs will grow 55 percent faster than non-STEM jobs over the next decade.

It gets better: CareerCast reported that nine out of the 10 best jobs in 2014 were in STEM fields.

“Stony Brook has been diligent in its efforts to increase the diversity of the students in the STEM disciplines,” Stony Brook President Samuel L. Stanley Jr., MD said. “Because of this anonymous donor’s generosity, the scholarships will continue to open doors and change the lives of qualified Riverhead High School graduates for many years.

Dr. Stanley noted that it is essential that Stony Brook – as well as colleges and universities across the country – graduate more students majoring in the STEM disciplines.

“For the United States to remain competitive in a global economy, STEM education must be a priority,” he said. “STEM graduates will undoubtedly play a crucial role in the nation’s future economic prosperity and well-being.”

The anonymous donor said he decided to create the endowed scholarship for three reasons: Stony Brook’s ever-increasing prestige as a research institution, the institution’s affordable tuition and the campus’ close proximity to Riverhead.

“These children are receiving a great education at an affordable price,” the donor said. “Along with the location – Riverhead being in the same region as Stony Brook – Stony Brook University provided the perfect fit.”

In a letter to the donor, Samudio wrote that “it is with tears of happiness in my eyes that I say thank you for making such a donation…Thanks to your donation, my family’s life is going to be completely changed.”

Leon too is extremely appreciative.

“Stony Brook has been my dream school for as long as I can remember, so I cannot really specify what I’m excited about because honestly, I am excited about everything,” Leon said.

Even with a high school average above 100, scholarship recipient Karla Reyes had been unsure if attending college would ever become a reality.

“The scholarship has been a huge economic relief to me and my family,” said Reyes, 19, a sophomore biology major at Stony Brook. “I have younger brothers. One will be a junior in high school this year. My scholarship leaves my family with more money for their education.

“And for me, being the first in my family to attend college is an important milestone,” added Reyes, who looks forward to going to medical school after earning her bachelors.