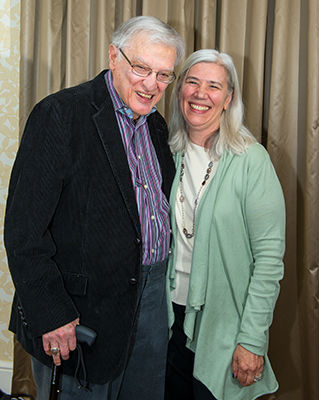 It was all about preservation.

When professors Harvey Aronson and Irene Virag set out to establish a scholarship for narrative journalism at Stony Brook University, the married couple was intent on two things: preserving the art of narrative storytelling and preserving their legacy.
“I care about writing. I really care about the written word, and I want it to carry on,” said Aronson, 85, who has taught journalism classes at Stony Brook in tandem with his wife since the creation of the University’s School of Journalism eight years ago. “I wanted there to be a scholarship that encouraged students to take on and fully experience narrative writing.”
One such student was graduating senior Kevin Lizarazo, whose touching feature about an elderly woman’s journey immigrating from Colombia to New York City helped him this May earn the inaugural Harvey Aronson and Irene Virag Scholarship for Narrative Journalism.
“I am interested in different ways of storytelling,” said Lizarazo, 22, a multi-media producer at the Council on Foreign Relations in Manhattan. “Whether it’s telling the story visually or telling it through words, imagery is very important to me. Narrative writing and filmmaking have that in common.”
Every good story needs a narrative drive, said Virag, who met Aronson in 1982 when they worked in the newsroom together at Newsday.
“We want to keep the idea of narrative writing alive and important,” said Virag, 58, a Pulitzer Prize-winner and Nieman Fellow at Harvard Newsday. “Narrative writing is storytelling about people and the way they live.
“At its best, narrative writing reveals how real people live—what they’re going for, what they’re struggling for, what their dreams are and what their everyday life is,” Aronson added. “It gets behind the news.”
Howard Schneider, dean of the School of Journalism, said narrative writing is vital to journalism.
“Narrative journalism’s ability to illuminate human conditions sets it apart,” Schneider said. “It’s about connecting us with other people. This scholarship elevates narrative journalism and its importance to the school.”
For Aronson and Virag, whose $27,000 gift started up the endowed scholarship, it was important the scholarship be available to graduating seniors, as well as underclassmen.
“We want this to be an award for writing and for growth as a writer,” Aronson said.
“Often at college, you hit your stride in your last semester. It would be a shame for someone to come so far—to grow so much as a person, student and writer—and then to not have the chance to get acknowledged by this scholarship.”

Lizarazo said he was in “total shock” when he heard the news that he had won the scholarship.

“It was such a touching story to work on,” said Lizarazo, who spoke of how liberating it was to employ fiction writing techniques into his non-fictional story. “For it to be recognized by the journalism school meant a lot to me.”
Good writing is what brought Aronson and Virag together. Virag’s good writing, that is.
Aronson was an editor and writing coach at Newsday when Virag arrived in 1982, and he immediately grew smitten with her prose. It was eight years before they began to date; they’ve been married for 22 years.
As the years passed and as their bond grew—in life and in writing—Aronson and Virag sought to further leave their mark on journalism.
“I said to Harvey, we should enable someone to establish a scholarship in our names for when we’re no longer here,” Virag said. “But then, one day, it hit us. Why do we have to wait?”
The idea of still having a journalism scholarship in his name decades from now intrigues Aronson, who has written seven books and has had articles published in such magazines as New York, Cosmopolitan and Sports Illustrated.
“Some time in the far flung future, maybe one person will look back through the mists of history and see these two names flashing on the screen: Harvey Aronson and Irene Virag,” he said.
Virag echoed her husband’s vision: “Somewhere, many years—maybe even decades—beyond our time on Earth, our names will be spoken together. And the kid who receives this scholarship will look up and see ‘Harvey Aronson and Irene Virag.’”
Choosing Stony Brook—home to the only undergraduate journalism school in the SUNY system—to leave their legacy was a no brainer.
“We teach there. We love the kids. And we love the written word,” Virag said. “And we have great respect for Howie (Schneider) and what he has achieved at Stony Brook in such a short time.”
At Stony Brook, Virag and Aronson teach three classes: Narrative Journalism, Magazine Writing and Journalists Turned Novelists.
Schneider said he wasn’t surprised by the couple’s generosity, considering their dedication to their students.
“What’s made them extraordinary is their ability to nurture our students and project a caring, supportive kind of attitude that has helped set our school apart from many other programs,” Schneider said. “We pride ourselves on a lot of one-on-one engagement—on being almost a family.
“Harvey and Irene have been crucial in making that happen. They don’t only teach our students, they adopt them.”