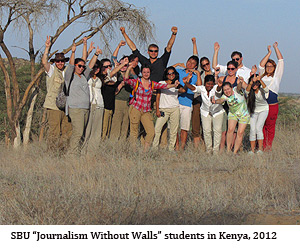 Last winter, 16 Stony Brook University students traveled to Kenya where they tested their skills as foreign correspondents. The trip was sponsored by the University’s Journalism Without Walls program supported in part by the Marie Colvin Center for International Reporting, which was established at the Stony Brook University School of Journalism to honor fallen foreign correspondent Marie Colvin, who lost her life reporting on the Syrian conflict in February 2012.

The Journalism Without Walls program brought the students to the Turkana Basin Institute in Northern Kenya where they reported, wrote and produced original multimedia and broadcast pieces.

“I’ve never had a study abroad experience before, because I didn’t want to stay away from home for a whole semester and it’s always been kind of expensive,” said Alyssa Melillo, a first semester graduate student from Holtsville, NY who went to Kenya her senior year. “Also I really wanted to do something that would help my major rather than going somewhere like Australia and taking electives. The Journalism Without Walls program gives you the chance to go to really interesting places that you normally wouldn’t go to on vacation.”

The Turkana Basin Institute is located in Kenya’s Rift Valley and is run by Stony Brook University faculty and world-renowned paleontologists, Richard, Meave, and Louise Leakey. The trip was open to all students who have completed an intermediate reporting class at the University. Need-based scholarships were provided by The Marie Colvin Center, which has received substantial donations from News Corp CEO and Chairman Rupert Murdoch and CNN’s Emmy-winning Chief International Correspondent Christiane Amanpour.

“I am delighted to support the Marie Colvin Center for International Reporting,” Amanpour said during her visit to Stony Brook. “Marie was one of those rare journalists who believed in telling the human story of war. She also believed in mentoring young journalists, helping them discover that being a foreign correspondent can be the most noble and vital calling. I hope this Center will attract, educate, and send forth future generations to follow in Marie Colvin’s footsteps.”

The Center and its avid supporters underscore how philanthropy enables life-changing educational experiences for Stony Brook students, pointed out Dexter Bailey, Vice President for University Advancement and Executive Director of the Stony Brook Foundation. “Private dollars provide that margin of excellence all across campus,” he said, “reaching as far as our research site in Kenya and elsewhere around the world.”

“We are tremendously encouraged by the philanthropic support and overall positive response we have received from the industry,” said Professor Ilana Ozernoy, Program Director for the Marie Colvin Center for International Reporting. “Our ultimate goal is to establish an endowment in honor of Marie Colvin at Stony Brook so we can continue to train the next generation of international multimedia reporters.”

Journalism Without Walls is a singular program, which gives students real-life field training, which cannot be replicated in a classroom. In recent years, the Journalism Without Walls has sent students to China, Russia, Cuba and the Gulf of Mexico, and a trip to Istanbul is in the works for this coming January. Kenya was chosen because Turkana has been called the last frontier on earth and is one of the most underdeveloped and underreported regions of the world.

“I think that seeing other countries helps give us a sense of context in the world as a whole,” said senior journalism major Michael Ruiz who participated in both the China and Kenya trips. “I’m glad I’m an American. Now I have a better sense why. Going with the J-School meant that I wasn’t just going on tour to see old works of art and beautiful, but empty, churches. I did work. I learned things. I got clips. It was a great experience.”

About The Marie Colvin Center for International Reporting:

Students receive travel scholarships based on financial need and merit, to travel overseas on foreign reporting trips. Going forward, the Center plans to provide scholarships, which will allow students to intern in foreign news bureaus.

The Center was established at the Stony Brook University’s School of Journalism to honor the memory of the late foreign correspondent Marie Colvin. The center aims to nurture the next generation of overseas reporters.The groundbreaking, hands-on Journalism Without Walls reporting program was created and is run by the faculty of the SBU School of Journalism and offers a specialized curriculum developed by faculty with decades of international field experience.