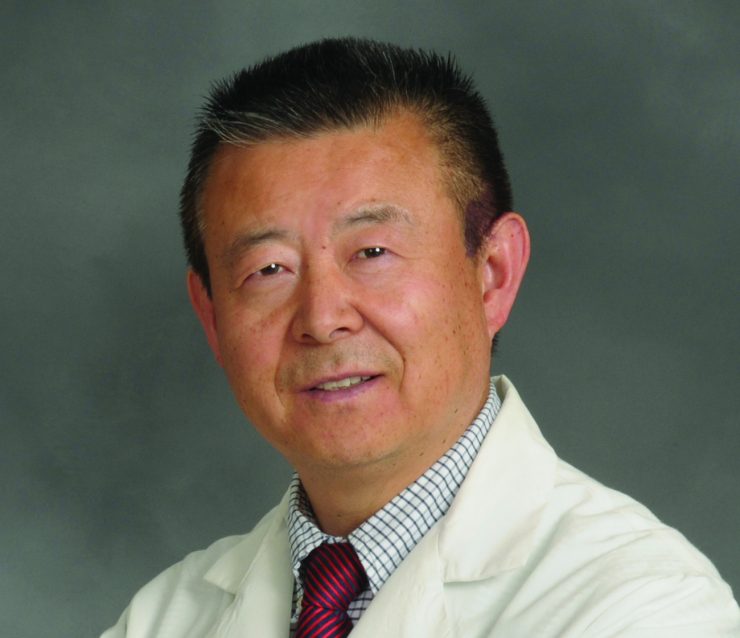 The chairs, endowed by Huayi Zhang, PhD and Siuling Zhang, enable the University to recognize two of the world’s most eminent scholars in their respective fields.

In her remarks, President Maurie McInnis expressed the University’s gratitude to the Zhangs for investing in these esteemed researchers: “Your support through these endowed positions underpins our ability to assemble a faculty of prodigious talent, who come to Stony Brook knowing that they are surrounded by a community of aspiration and dedication — a community that prepares for, believes in, and helps build the future. You saw in Stony Brook not just an institution worth supporting, but one worth championing.”

Huayi and Siuling Zhang have been champions of Stony Brook for nearly a decade. In addition to endowing these chairs, Huayi Zhang inspired several of his former classmates from the University of Science and Technology in China to help establish an endowed chair in physics and astronomy at Stony Brook as a tribute to C.N. Yang, renowned Stony Brook professor and Nobel Prize-winning physicist.

Huayi Zhang’s own career has been defined by the same forward thinking that underpins his commitment to Stony Brook. After earning his undergraduate degree in China in the 1977 cohort of students who were widely regarded as the best and brightest in the country, he earned an MS and PhD in physics from Virginia Polytechnic Institute and State University and was a postdoctoral fellow at Rutgers University. As a principal researcher at Kepler Financial Management, he was integral to devising the company’s mathematical trading system. He recently retired from Renaissance Technologies.

“Since we moved here 25 years ago, having a great hospital in the neighborhood has always been on our top wish list. About 10 years ago, the opportunity came when Jim Simons led the effort to fund the University and the medical school. We joined the effort immediately and funded an endowed chair for microbiology. Years later, we funded another endowed chair, for rheumatology,” said Siuling Zhang. “Today, both endowed chairs come to their ceremonial inauguration. All eyes are on David and Qingping now. We are confident that they will continue to deliver great progress and make their already outstanding departments even better.”

As director for the Center for Infectious Diseases and the Laboratory for Comparative Medicine at Stony Brook University and professor and chair of the Department of Microbiology and Immunology in the Renaissance School of Medicine, Professor David Thanassi is a leading expert in investigating how bacteria cause disease.

Professor Thanassi and his colleagues have been working tirelessly to find new ways to treat bacterial infections as the continuing misuse and overuse of antibiotics imperils their effectiveness, creating drug-resistant “superbugs.” In 2016, he was among 24 researchers nationwide to receive $5 million in grants from the National Institutes of Health to develop non-traditional therapeutics for bacterial infections to help address the growing health threat of antibiotic resistance.

Dr. Qingping Yao is a widely regarded expert in the study of systemic inflammatory and immunologic diseases. As chief of Stony Brook’s acclaimed Division of Rheumatology, Allergy and Immunology; professor in the Department of Medicine; and director of the Center for Autoinflammatory Diseases, Dr. Yao specializes in rheumatology and focuses his care for patients with autoinflammatory diseases, including periodic fever syndromes, while pursuing the clinical and translational study of such diseases.

Among his significant contributions, Dr. Yao discovered a previously uncharacterized disease, the eponymously named Yao Syndrome. Under Dr. Yao’s leadership, the Center for Autoinflammatory Diseases at Stony Brook University Hospital has become one of the few centers in the United States to offer expert knowledge and management of these disorders, supported by multidisciplinary care and groundbreaking research.

“Stony Brook’s reputation has been burnished by Dr. Thanassi’s and Dr. Yao’s extraordinary expertise and national leadership in their fields,” said Senior Vice President of Health Sciences and Dean of the Renaissance School of Medicine, Kenneth Kaushansky, MD, MACP. “Their work is more important now than ever before, and with these endowed chairs, they will be even better positioned to make critical advancements in the study and treatment of infectious and immunologic disease.”