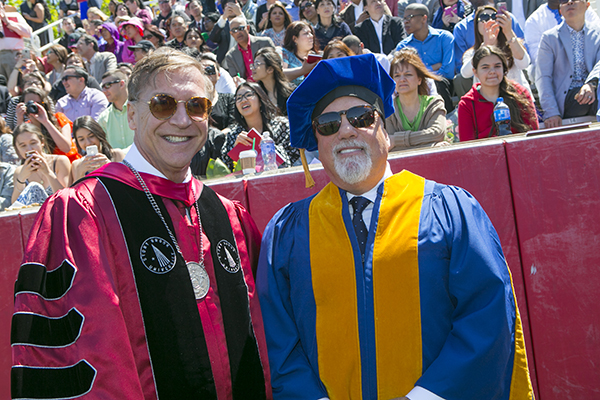 At Stony Brook University’s 55th commencement ceremony today at Kenneth P. LaValle Stadium, 6,298 students had their degrees conferred, becoming the University’s newest alumni. They joined more than 155,000 of their forerunners around the globe whose lives and work personify the mission of Stony Brook.

During the ceremony, two of Long Island’s most prominent luminaries, Billy Joel and Charles Wang, received honorary degrees – a Doctor of Music and Doctor of Humane Letters, respectively. Upon conferring the honorary degree to Billy Joel, President Stanley stated, “Your commitment to your home state is reflected in your countless contributions to New York City and Long Island, including a very generous gift to Stony Brook University of one of your pianos following the loss of ours in a flood – making you truly our Piano Man.”

State University of New York Trustee Cary Staller conferred the honorary degree to Mr. Joel. In his acceptance speech, Billy Joel remarked, “I hope that by now you have found what it is you love and I hope that you have learned the skills you need to make what you love your life’s work…I wish for you the stamina to continue that work when you encounter resistance and tough times…if you’re not doing what you love, you’re just wasting your time.”

Charles B. Wang, during his acceptance speech, stated his beliefs in four points, “one – you can make a difference; two – integrity and loyalty are only words until tested; three – love life to the fullest; and four – have fun.” He also described his inspiration to create the Charles B. Wang Center, an Asian and Asian-American cultural hub at the University.

One day earlier, renowned computer scientist Professor Ben Shneiderman , received a Doctor of Science at the Doctoral Hooding ceremony at the Island Federal Credit Union Arena. He spoke of the great potential each student had to make a significant impact when he stated, “Every one of you is capable of making a small contribution that could bring about a big change.” He went on to say “new ideas are often rejected by those too immersed in their own way of thinking to accept something new. I’ve seen how hard it is to launch a new idea. So stick with what you believe in, and when your ideas become widely adopted, you’ll feel the great satisfaction of making a valuable contribution.”

During his commencement speech, Stony Brook University President Samuel L. Stanley Jr., M.D., spoke of the value of a Stony Brook degree, noting that Stony Brook University is ranked the #1 public school in the Northeast for return on investment, and emphasized the school’s mission to provide the highest quality education and access top-notch research facilities and faculty.

In his address, President Stanley noted, “We will work tirelessly to increase the value of your Stony Brook degree, improving the quality and reputation of this University, making your investment in Stony Brook, both of time and money, the best investment you have ever made.”

Provost Dennis N. Assanis announced the winners of the Ward Melville Valedictorian Award, the University’s most distinguished undergraduate honor named for the first chairperson of the Council of Stony Brook University. The Ward Melville Valedictorian Award goes to the graduating senior or seniors who have attained the most outstanding academic record during four years at Stony Brook. The students who received the award were David Chen, Kelly Frevele, Elizabeth Ha, Saif Laljee, Janagan Naahanathan, Ariel Yang, and Wangning Xue.

Provost Assanis also announced the winners for the H. Lee Dennison Valedictorian Award, named in honor of Suffolk County’s first chief executive and presented to the graduating senior or seniors who entered Stony Brook as a transfer student, completed at least 60 credits of letter-grade work at Stony Brook and attained the most outstanding academic record in that work. The students who received the award were Ian Bacchus, Cassandra Dix, Jonathan Hurwitz, William Massa, Xiangzhi Meng, Augusto Russo, and Matthew Sacco.

The student speaker, Ashley Rizzotto, graduated with a Bachelor of Arts in Sociology and minored in Health and Wellness and Women and Gender Studies. Rizzotto, was selected by a committee of staff and faculty from a pool of submitted speeches provided through the annual senior speaker competition, shared her thoughts about her four years as a Seawolf.

During her speech, Ashley Rizzotto remarked, “your personal journey of academic and social success started somewhere here, and will stay with you for the rest of your life. Even though we all come from different backgrounds, and are leaving with different lessons learned, whether we started as a transfer or freshman, we are always united as Seawolves.”

Finally, on behalf of the Class of 2015, Senior Class Representative Tyesha Arnette-Jordan presented President Stanley with the Senior Class Gift of $8,613 designated to support a variety of areas that touched their lives including their individual departments, colleges or to one of variety of other University priorities like the Children’s Hospital and Student Scholarships, adding to the $250,000 Stony Brook students have raised the past 10 years.

As an SBU grad student, Hurowitz was part of the Mars Exploration Rover mission in 2004. Now he is involved in the latest rover mission, Perseverance.