Stony Brook Takes Down UMBC in First Round of AE Tournament 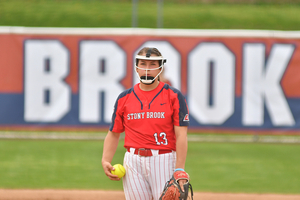 The Stony Brook softball team took down UMBC 5-1, in its first game of the America East Tournament. The Seawolves broke the game open in the third inning scoring three runs on two hits and one UMBC error. Melissa Rahrich‘s home run in the bottom of the third was her seventh of the season and sixth in conference play.

“This was a good team win and good way to start the tournament. We made big plays, played solid defense, and executed offensively. We finished the game strong and look to take momentum into tomorrow,” said head coach Megan T. Bryant.

The Seawolves will take on UMass Lowell on Thursday, May 10 in their second game of the America East Tournament at 1:30 p.m.