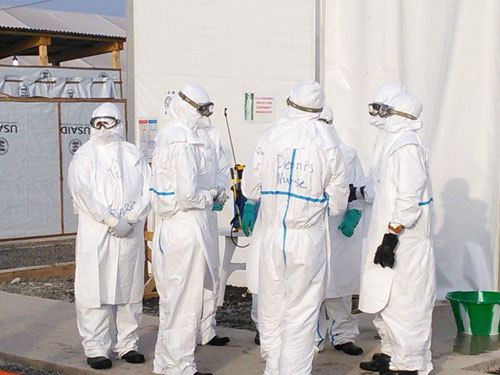 Dr. Dario Gonzalez Back Home After Heading Up an Ebola Treatment Unit in Liberia

Dario Gonzalez’s four grandchildren have no idea where “Papi” goes when he leaves town for work.

Given the nature of his work as a globe-trotting emergency medicine doctor, the ’79 Stony Brook University School of Medicine graduate believes his grandkids, aged 8 to 16, are better off kept in the dark.

Gonzalez, 68, the associate medical director of the New York City Fire Department, spent November and December in Liberia – on the front line in the world’s fight against Ebola, working with the World Health Organization (WHO) and Americares as the medical coordinator of a 160-member, 50-bed Ebola Treatment Unit (ETU).

During other years, he was part of the FEMA Urban Search and Rescue emergency response teams in New Orleans in wake of Hurricane Katrina, in Haiti after the devastating earthquake in 2010 and at the World Trade Center following the Sept. 11 terrorist attacks.

“My grandchildren really don’t have much of a concept of what I do,” said Gonzalez, who will speak about his time in Liberia during Stony Brook University’s Converging Sciences Summit 2015: Community Engagement and Population Health on April 27 in the Student Activities Center.

“They just know I wander off and disappear periodically. Sometimes, they see me on TV and say, ‘Oh, there he is,’” added Gonzalez, who is also the medical director of the New York City’s Office of Emergency Management.

Chances are Gonzalez’s grandkids didn’t see him on TV during his mission in Liberia, considering that most of his time there was spent covered in a protective white suit, goggles and a mask.

Gonzalez of the Bronx thought of his grandchildren often during his time in West Africa, particularly while treating the youngest Ebola victims.

“It is extremely difficult to see the kids suffering with Ebola,” he said. “I admitted one girl early in the evening before my shift ended in the unit. She was 13. She was vomiting, could barely walk and was skinny as a rail. She had been riding in the back of a pickup truck for six hours. When I came back to check on her the next morning, she was already dead.”

The doctor said he encouraged his staff not to dwell on those lives that were lost, but to shift their focus on saving others and on their own safety.

“There were always more victims to deal with. If you get obsessed with it, you lose concentration and can get into trouble,” Gonzalez said.

“People ask me if I get nervous, if I ever get scared. The answer is ‘Yes.’ If you’re working with someone who isn’t nervous or scared, get rid of them and don’t work with them,” continued Gonzalez, who credits Stony Brook for inspiring him to become the adventurous and dedicated doctor he is today. “Eventually, you just get accustomed to where you’re at.”

Leaving for Liberia
Gonzalez left for Liberia on October 30, at the height of the Ebola scare in New York City. Doctors without Borders physician Craig Spencer remained in serious condition with Ebola at Bellevue Hospital Center at the time. Spencer, who had worked in Guinea, had been widely criticized in the media for not better quarantining himself, even though he had followed the instructions provided to him.

“That made my family very uncomfortable,” Gonzalez said. “Other people said, ‘What are you, nuts?’”

Another doctor slated to go with Gonzalez to Liberia was told by his hospital that he could not go because of the New York City Ebola scare. Nonetheless, Gonzalez went ahead with his plans to use vacation time at the fire department – three months’ worth – to head up an ETU in Buchanan, Liberia.

Gonzalez explained that his unit’s chief tasks were to save as many Ebola victims as possible and to slow the spread of the virus, while ensuring the safety of the clinical and non-clinical staff in the ETU.

“We give them fluids, antibiotics, antimalarial drugs and basically just try to keep their nutrition and hydration up. The mainstay of treatment is supportive care,” said Gonzalez, noting that Tylenol was the strongest pain management medication available. “We’re trying to keep them from falling apart and to weather the disease until their immune system can make antibodies.”

In the Hot Zone
Amid all the suffering of the victims is a constant threat of deadly contamination for those administering care.

“In the hot zone, an IV needle stick is a fatal mistake,” Gonzalez said. “You wear your gear and you have protection. But not everything is 100 percent. There is no guarantee that you can swim in the pool and not get wet.”

The key to success in the ETU was is to be deliberate in everything you do, Gonzalez said.

“There is a saying in the Ebola Treatment Unit that there is no emergency – that you do not run to anything,” he said. “Because the price you pay with tripping or falling and breaching your gear could be a fatal outcome.”

While Gonzalez witnessed his share of heartbreak in the ETU, satisfaction came in watching those lucky enough to survive the deadly virus. In particular, he remembers a 3-year-old girl who came to the ETU with her mother and older sister.

Back in her village, the little girl’s father, sister and other relatives had already died from Ebola. In the ETU, the girl’s mother and sister also died. The 3-year-old girl spent 27 days in the ETU before she finally tested negative for Ebola.

“As far as I know, she was the last surviving member of that family,” Gonzalez said. “She was a fighter, a survivor. Everybody in the ETU took care of her. Workers, patients, doctors and nurses. There was always somebody around to watch her.”

Coming Home
Gonzalez left Liberia on December 30, flying to Brussels, where he’d spend 22 days in quarantine before returning to New York. At the time, the United States required individuals potentially exposed to Ebola to stay in quarantine for 21 days. At Kennedy Airport, he hardly received a hero’s welcome.

“The security at the airport didn’t know what to do with me,” he said. “I stayed in Brussels for 22 days deliberately so I wouldn’t have to deal with any of the issues about quarantine.

“When I told the customs agent that I had been in Liberia and that I was treating Ebola patients, he took a giant step back,” added Gonzalez, who eventually received clearance that day from the CDC for re-entry into the country.

Despite the testy return home, Gonzalez is proud of his time in Liberia and the accomplishments of his medical team.

“We helped to put the brakes on this disease. The death rate of children stricken with Ebola where we were dropped from 74 percent to below 50 percent and for adults, it dropped from 90 percent to 40 percent,” he said.

Gonzalez acknowledged that his current days as a globe-trotting emergency medicine doctor – India, Romania, New Zealand, Germany, England, Greece, Mexico, Austria and Spain being among his many destinations – are a long way off from his days of living in Ronkonkoma and working as a cab driver and locksmith to put himself through medical school at Stony Brook.

“Stony Brook has come a long way since then. I graduated with a small class of 49,” he said. “I remember having a very close relationship with the faculty and having the sense that the faculty was very committed to the success of the school.”

“I left Stony Brook with a tremendous amount of confidence.”