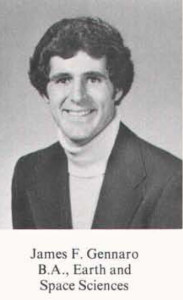 From his days of boating in the bays near his boyhood Bellmore, Long Island, home, Jim Gennaro ’79, ’82 knew exactly what he wanted to do — shape environmental public policy.

“Growing up where I did instilled a love for nature in me,” said Gennaro. “I just wasn’t sure whether I wanted to study geology or oceanography.”

That was until he set foot on the Stony Brook campus. “On my very first day, September 2, 1975, I declared my major,” he said. “I wound up taking 56 credits of geology.”

Using “rigorous scientific foundation” for what he hoped would be public policy work using geology as his base, Gennaro loaded up on courses in ecology and the natural sciences. “When I was done I had a robust scientific interdisciplinary platform to work from,” he said.

Gennaro earned a bachelor’s degree in geology and went on to acquire a master’s in urban and policy sciences from Stony Brook’s W. Averell Harriman School for Management and Policy.

He had the good fortune to cross paths with a couple of science “giants” who left an enormous academic imprint on him. The first of these was Charles Prewitt, who taught at Stony Brook from 1969 to 1986 and originated one of the country’s pre-eminent programs in high-pressure crystal chemistry research.

But it was Steven Englebright, then curator of the geologic collections at Stony Brook and founding director of the Museum of Long Island Natural Sciences, who was Gennaro’s inspiration to become an environmental advocate. Englebright served as a Suffolk County legislator from 1983 until 1992, at which time he was elected to the New York State Assembly, where he still serves. “He was the Pied Piper and his museum office became the Long Island environmental activism command center in the late ’70s,” Gennaro said.

As an intern with Engelbright, Gennaro set the tone for his entry into public service by doing research that led to the Peconic River’s designation as a Wild Scenic and Recreational River under New York State law.

In 1983, not long after completing his master’s, Gennaro’s career path took a defining turn. A former graduate of the W. Averell Harriman School was working in the Koch administration in New York City and alerted Gennaro that there were job openings. Gennaro applied for and was accepted to work in the Office of Management and Budget.

Another big break came in 1990 when Gennaro was asked to serve as senior policy advisor to former New York City Council Speaker Peter Vallone Sr. “I was given pretty broad authority to work as an environmental policy advisor to the city council as deputy director of the Office of Policy and Research.

“I never would have left that job but the term limits passed on a ballot in 1993 restricted city-elected officials to eight years,” he said. Gennaro explained that it is common for senior staff to be replaced with the advent of a new administration.

“So, eight years later in 2001, when 38 of the 51 city council members including the speaker were going to be term-limited out of office, that’s when I decided to run for the council,” said Gennaro. “Knowing that freshman members would get to chair major committees with such a large turnover of council members, I’d be well-situated and could chair the committee on environmental protection.”

In 2002 Gennaro ran as an insurgent in the Democratic primary. With support from his mentor, Mayor Ed Koch, Gennaro began the first of three terms as a New York City councilman from Queens. He drew an endorsement from noted environmentalist Robert Kennedy Jr. as well. He remained close to Mayor Koch until Koch’s passing in 2013.

Once elected to office and chosen by his colleagues to chair the Committee on Environmental Protection, Gennaro embarked on an aggressive environmental legislative agenda to cut the city’s pollution emissions, protect and restore Jamaica Bay, put more “clean air” vehicles on city streets, reduce pesticide use, and promote “green buildings” and other progressive initiatives. “Twenty-two years (12 years as councilman/chairman) and 50 bills later, here we are,” he said.

Term limits brought his public service as a New York City councilman to a close when the DeBlasio administration was sworn in this past January.

It didn’t take long for Gennaro to find work — he was immediately appointed by Governor Andrew Cuomo as the deputy commissioner for New York City Sustainability and Resiliency at the New York State Department of Environmental Conservation.

“I’m thrilled to be working for a governor whose environmental vision I’ve long admired,” said Gennaro. “This is a great opportunity for me to begin an exciting new chapter where I can research how New York State can be more resilient in its ability to weather storms.”

It seems that Gennaro’s career has come full circle: Stony Brook is one of the anchor institutions with which he will be working closely.

“It’s great to be in close contact with the University all these years later and doing what I have an acumen for — combining science with policies and strategies that can help people,” he said. “It’s both a homecoming and a dream come true.”