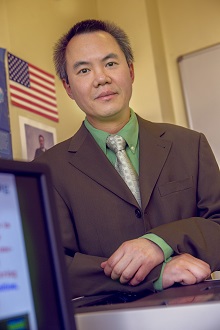 Stanislaus S. Wong, PhD, a Professor in the Department of Chemistry at Stony Brook University, is the 2015 recipient of the American Chemical Society (ACS) Inorganic Nanoscience Award. Sponsored by the University of South Carolina NanoCenter, the annual award recognizes “sustained excellence, dedication, and preservation in research in the area of inorganic nanoscience.”

Dr. Wong’s research at Stony Brook focuses on carbon nanotube chemistry and inorganic nanostructure synthesis, two areas that will potentially broaden the impact and practical applications of nanostructures. As a joint appointee with Brookhaven National Laboratory, he collaborates widely with scientists at both institutions in multiple disciplines including but not limited to physics, biology, engineering, and biomedicine – to advance nanoscience research in primarily energy-related fields such as solar cells, fuel cells and batteries.

Dr. Wong will receive the Inorganic Nanoscience Award, which consists of $3,000 and a plaque, at a symposium during the ACS annual meeting in August 2015. Recipients of the award are considered to be mid-career stage scientists.