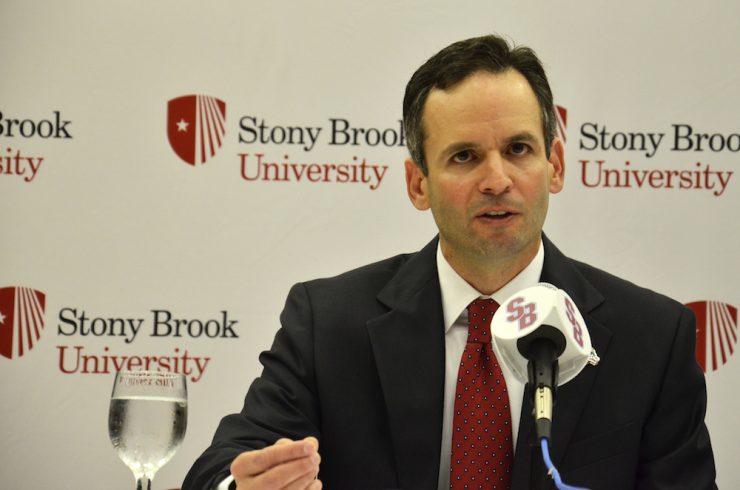 The clock reaches zero and the players rush onto the field, celebrating yet another victory. It’s been a familiar sight for Stony Brook Athletics so far this fall season. As of Oct. 21, the Stony Brook Seawolves’ fall-season teams are 21-3-1 in conference play, with its four pillars — Football, Men’s Soccer, Women’s Soccer and Volleyball — all experiencing tremendous success this season.

The main attraction of the fall season has always been football, where Stony Brook is currently 6-2 overall and 4-1 in Colonial Athletic Association conference play. Ranked No. 18 nationally in the FCS Stats poll, the Seawolves have followed up last season’s second-place conference finish and playoff appearance with another strong start.

Stony Brook has done well in the toughest FCS conference thanks to the senior running back duo of Donald Liotine and Jordan Gowins, nicknamed the Long Island Express. The defense has also shown big-play potential, returning turnovers for touchdowns six times. With their eyes set on a return to the playoffs, the Seawolves face formidable opponents like James Madison and Delaware ahead, and will need to win big games in order to secure a berth.

The men’s soccer team, who is currently first place in the America East with a 7-5-2 record (4-1-0 in conference play), clinched a berth in the conference tournament this past Saturday. While the team is relatively younger than in years past, it has improved since an injury-riddled 2017 through building momentum and chemistry between the new players and the veteran leaders. Director of Athletics Shawn Heilbron spoke highly of senior midfielder Serge Gamwanya.

“I think he deserves strong consideration for America East Player of the Year,” Heilbron said. “He’s a leader on the team who does so much on the field, with many things that don’t show up in the box score.”

The women’s soccer team, standing at 11-6-1 (6-1-1), has clinched a spot in the America East Championship for the third straight season. Armed with a strong veteran presence, the team shines due to its awareness on the field and its players’ support of one another. Currently tied with Hartford for first in the conference, its goal is to win the regular season, host the conference tournament and win out to make the NCAA tournament for a second consecutive year.

The volleyball team may be experiencing the best stretch of them all, currently in the midst of a 10-game winning streak. Its 14-8 record, which includes a first-place 7-0 record against the America East, has proven that the Seawolves are no pretender after winning the school’s first conference title last year under newly-hired head coach Kristin Belzung. Heilbron believes it is a good sign that the team is not fully satisfied with its level of play even after consistently sweeping its opponents.

The flourishing of Stony Brook Athletics was envisioned by Heilbron’s five-year “Together We Transform” plan, and he points to improvements in facilities, nutrition, strength and conditioning and sports medicine as keys to this successful run.

“It comes down to the culture that’s been built in this department to believe that we can win at the highest level and show the nation what we can be,” Heilbron said.

Heilbron was named director of athletics in 2014. Having previously worked at larger schools such as Oregon State and UCLA, he explained that the goals do not change depending on a university’s size.

“You’re relying upon a smaller number of people to support student-athletes, to raise money, do all the things necessary to help our student-athletes achieve success,” Heilbron said. “The issues are the same.”

As a relatively young school, Stony Brook has a lot of room to grow with regards to its athletics department. The university reached Division I status in 1994, meaning it does not yet have the traditions or history that many of its opponents do. It is crucial to build on the success so far and sustain it into the winter, spring and seasons beyond. The theme of “sustainable success” was heavily emphasized as a necessity to help market the school and help its teams grow into some of the country’s best.

“We’re showing right now what is possible at Stony Brook,” Heilbron said. “How do we become a program that perennially goes to the NCAA tournament in men’s basketball, that ranks top 10 in football every year?”

For now, the answer is to win the America East regular season and take home the Commissioner’s Cup, in which Stony Brook has finished second to Albany for each of the last six years.