Our ancestors were making stone tools even earlier than we thought—some 700,000 years older. That’s the finding of the West Turkana Archaeological Project (WTAP) team—co-led by Stony Brook University’s Drs. Sonia Harmand and Jason Lewis—who have found the earliest stone artifacts, dating to 3.3 million years ago, at a site named Lomekwi 3 on the western shore of Lake Turkana in northern Kenya.

In the 1930s, paleoanthropologists Louis and Mary Leakey unearthed early stone artifacts at Olduvai Gorge in Tanzania and named them the Oldowan tool culture. In the 1960s they found hominin fossils (in association with those Oldowan tools) that looked more like later humans—and assigned them to a new species, Homo habilis, handy man.

“The site at Lomekwi provides an ideal window into early hominin behavior across an ancient landscape. The exposures of sedimentary strata there allow us to place these activities in a detailed environmental context, and to tightly constrain their age” notes geologist Craig Feibel of Rutgers University, a co-author on the study. 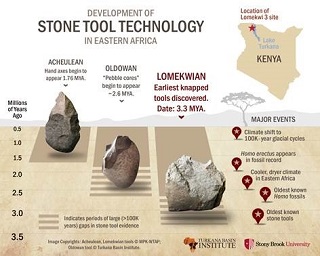 Click here to read what the experts are saying.